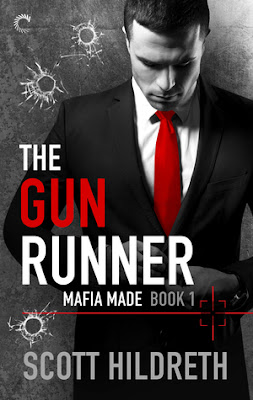 Walk on the wild side with The Gun Runner. Lovers of Mimi Jean Pamfiloff’s King series and Tillie Cole’s Scarred Souls series will lose themselves in this story of all-consuming passion and dark deals.

The first book in a seductive new series from Scott Hildreth, the #1 Amazon bestselling author of BRAWLER and HARD CORPS.

Once, I took down terrorists on the front lines as a marine.
Now I'm in the business of bad.
I've sold guns to people others might not approve of.
I've eliminated the criminals, the lowlifes and the thugs who've tread on my turf.
And I looked the Sicilian Mafia boss in the eye and told him to f*** off.
No one tells me no, unless it's their last word.
I didn't just act the part of bad—I lived it. Then she stumbled into my life.
I tried to stay away from her. Tried focusing on moving my merchandise. But one smile from Terra was like a shot to the heart.
She's mine now. And no one threatens what's mine.

I've seen a lot of terrible things in my life.
I grew up around lies and deception, and I ran away from all of them.
Until I met him.
I knew he was corrupt. I knew he was dangerous.
I should have stayed away, but my attraction to him, my needfor him, overrode my logic.
Now I love him.
If he finds out who I am, we're done and I'll be nothing.
I never wanted to be the Mafia princess they tried to make me, but mia familia had other plans. And what mia familia wants…it gets.
Only Michael Tripp can save me.

The Gun Runner is the first book in the Mafia Made series by Scott Hildreth.  It’s also my first time reading this author.  I must say that I am now a fan.  I loved everything about this book.  It was fun, edgy, scorching hot, and refreshing.  The action was off the charts both in the bedroom and on the urban battlefield.  I was intrigued from start to finish.  The hero and heroine were nothing like characters that I have read in the past.  Their attraction was a little scary at first but that’s only because it was so raw.

Michael Tripp is a Gun Runner.  He is a former Marine who was in the military for 10 years. He has seen a lot of violence.  In addition, he is an orphan so the military was his only family. He is honorable and fearless.  Now, he sells guns to those that he believes have a noble cause and he makes a lot of money doing it.  One morning, he saves a seemingly damsel in distress from getting assaulted by her former boyfriend.  This damsel just so happens to be a mafia princess named Terra Agrioli.  Her father is a true MAFIA GODFATHER who everyone knows and fears.  Terra and Michael quickly become smitten with each other but neither of them is totally honest about who they really are.  Terra claims to own a shoe store and Michael claims to be an investor.  As usual, the deception becomes an issue for their future together at some point.  In the meantime, they have some sexual escapades that can’t be described as anything other than erotic and that’s putting it nicely. In addition, several people get maimed or killed either by Michael or by his direction. Things really go south when Terra’s father tries to horn in on Michael’s business and doesn’t want to take no for an answer.  It’s somewhat comical that in the midst of Michael’s run-ins with the mafia, he doesn’t make their connection with Terra.  And Terra does too good of a job keeping her secret.

There is so much more to say but I don’t want to ruin it.  The discovery process will be entertaining for anyone that decides to venture into this world that Scott Hildreth has created.  Nothing about the book was typical so if you are interested in something totally off the wall, this is it.  My only complaint was that I have to wait until the next book to find out how certain things unfold.  I’m sure that it will be worth the wait though.

**Received a copy from Carina Press in exchange for an honest unbiased review.**

The Mafia Made Series:
(Clicking on the book covers will take you to Amazon.)