Review ~ THE DOLLMAKER by Mary Burton 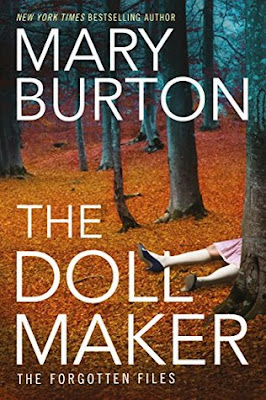 At the grisly murder scene of a teen prostitute, Virginia state trooper Riley Tatum’s past roars back to haunt her. When she was a teenage runaway, she was kidnapped, drugged, and left unconscious on the streets. She has no memories of what happened, only strange recurring dreams of two men playing cards.

Former FBI agent Clay Bowman, Riley’s old flame, is Shield Security’s newest member. He’s plagued by the unsolved case of a serial killer nicknamed the Shark who murdered girls as part of a sadistic poker game. Only one girl survived. With the Shark now bent on evening that score, Clay has a chilling suspicion: Riley is the girl who escaped the Shark’s deadly amusement—and she is his next prey.

As the Shark gets ready to play his hand, can Riley and Clay stop him—or will this killer finally claim the one who got away?

The Dollmaker is the second book in Mary Burton’s The Forgotten Files series.  There are a few people that spill over from the first book, The Shirk, but this is still a stand alone read. By comparison, I feel like this is even better than the first book.  Mrs. Burton definitely knows how to craft a wicked romantic suspense.  Be sure not to read this book if you are prone to nightmares and have an aversion to dolls.

The Dollmaker focuses on Virginia State Police Agent Dakota Sharp and his investigation into the murder of a promising young high school student and a woman who looks like she has been turned into a living doll. As the investigation intensifies, Dakota must also deal with demons from his own past regarding not only his dead sister but also his estranged wife. Since this is a romantic suspense, I will have to leave it at that regarding the details. I will say that everything is relative when it comes to this book. The fact that this all happens in a small town makes things that much more complicated.

I really loved The Dollmaker. It flowed nicely and there was never a dull moment. I couldn’t help but hope for the best when it came to Dakota and his personal life. He is a great detective and a tortured soul. I appreciated the fact that his estranged wife had not given up on their marriage and was trying to reconcile while at the same time also trying to understand what it meant to be a homicide detective. I look forward to the next book in the series.