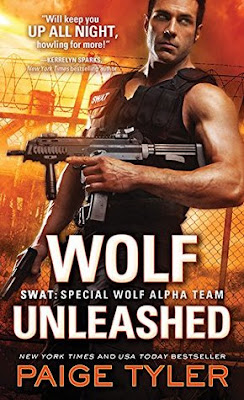 SHE BRINGS OUT THE WOLF IN HIM
Lacey Barton can't deny her crazy attraction to Alex Trevino, but that doesn't mean she has time for the gorgeous SWAT officer. She's hell-bent on discovering who's behind the brutal dogfights sending countless mauled animals to her veterinarian office. The trail leads Lacey to a ring of vicious drug dealers and suddenly she's in way over her head-right smack in the middle of a SWAT stakeout.

With Lacey in danger, Alex's wolf side is unleashed. But when she witnesses Alex shift, she's even more terrified... Now it's up to Alex to crack the case-and earn back Lacey's trust and, ultimately, her heart.

Wolf Unleashed is the fifth book in Paige Tyler’s SWAT: Special Wolf Alpha Team series. You do not need to have read the other books to enjoy this one but I believe that the additional background gained from the other books would enhance your enjoyment of this one.  Plus, there is a common theme throughout all of the books that you wouldn’t totally understand unless you read the other books.

Wolf Unleashed is about SWAT team member and werewolf Alex Trevino. He meets Veterinarian Dr. Lacey Barton and his entire world turns upside down.  Lacey has a lot of baggage due to the bad example that her parents set for her when she was younger. Consequently, although there is a definite attraction between them, Lacey plays hard to get. Unfortunately for Alex, Lacey is “The One” which means that according to Werewolf legend, they are destined to be together.  To add insult to injury, Alex is also knee deep in an investigation into a dangerous designer drug that has been ravaging the city.  Meanwhile, Lacey has gotten herself involved in trying to expose a deadly dogfighting ring. Unbeknownst to them, their professional worlds will collide with their private ones and cause an unexpected strain in their relationship.

Alex and Lacey’s relationship may start out a little icy but once they get together, things heat up substantially.  Their time between the sheets is X-Rated and sure to get you a little hot under the collar.  They make for a great couple except for the one little detail about Alex being a real life werewolf.  More importantly, his whole team is comprised of werewolves. When Alex’s secret is revealed, things become complicated and that’s the part that turns me off about the book.  In every one of these books where one person is not a werewolf, the werewolf never gets the opportunity to be honest and reveal his secret before something happens that forces them to be exposed to their mate.  Then, there is the expected part of horror and feelings of betrayal that ensue.  I would just like to see a different scenario play out  in the next book so that I can truly be surprised by the interaction.  Again, I really like the books.  Wolf Unleashed has an interesting scene where Alex ends up doing a lot of fighting while he is totally naked which I thought was crazy and kind of cool.  The SWAT team likes to keep things interesting.  I look forward to the next book.