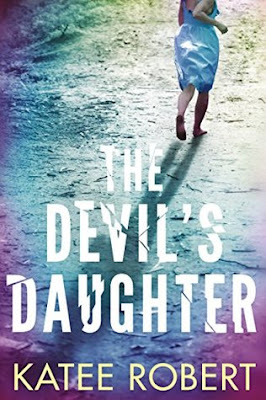 Growing up in a small town isn’t easy, especially when you’re the daughter of a local cult leader. Ten years ago, Eden Collins left Clear Springs, Montana, and never once looked back. But when the bodies of murdered young women surface, their corpses violated and marked with tattoos worn by her mother’s followers, Eden, now an FBI agent, can’t turn a blind eye. To catch the killer, she’s going to have to return to the fold.

Sheriff Zach Owens isn’t comfortable putting Eden in danger, even if she is an elite agent. And he certainly wasn’t expecting to be so attracted to her. As calm and cool as she appears, he knows this can’t be a happy homecoming. Zach wants to protect her—from her mother, the cult, and the evil that lurks behind its locked gates. But Eden is his only key to the tight-lipped group, and she may just be closer to the killer than either one of them suspects…
REVIEW

The Devil’s Daughter had all of the great elements that I like to see in a romantic suspense. The major characters were likable but flawed.  The romance was a good distraction from the horrors that occurred but wasn’t the main attraction.  And, it wasn’t until the very end that the true villains were revealed.  All in all, Katee Robert has weaved together an excellent tale that illustrates how it’s not easy to keep your past in the rear view mirror no matter how much distance you create.

Eden Collins was born into a Montana cult that was created and ruled by her mother Martha.  Eden had to endure some unspeakable acts well before she became an adult. When she was old enough to leave the cult, she got as far away as possible and joined the FBI.  She used her own experiences to help take down other cults.  Eventually, the murder of a young girl dangerously close to her mother’s cult lures Eden back to town to assist the local Sheriff Zach Owens with the investigation.  To further complicate things, the body count starts to increase and the familiarity of the murders make the hair on the back of Eden’s neck stand up.  She is confident that her mother is directly involved but she tries desperately to keep her own emotions out of the investigation.  That becomes even more of a challenge as she also attempts to deny herself of having a relationship with Zach.  She can no more deny her attraction as she can deny the connection to her unfulfilled prophecy regarding the cult and her role as Queen of the Underworld.

I was very pleased with the misdirection that plays out throughout the investigation.  Small town investigations are always tricky because everyone likes to get involved with the investigation.  Once you throw in the defiant attitudes of cult members, everything becomes more complicated.  I felt sorry for Eden as she tried to exact information from her mother while trying to maintain her distance.  As a cult leader, Martha was truly a wolf in sheep’s clothing.  On the other hand, Zach was a diligent and persistent investigator who took all of the crimes personally and felt that it was his responsibility to keep his citizens safe.  Eden was strong, resourceful, and brave as she attempted to slay the demons of her past.  I look forward to reading the next book in this series.

**Received a copy from Montlake Romance and reviewed voluntarily.**