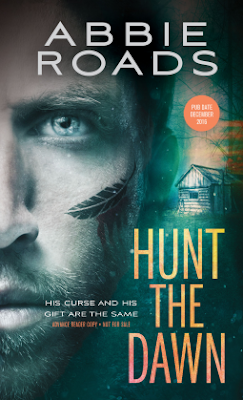 Out of darkness and danger...

You can’t hide your secrets from Lathan Montgomery—he can read your darkest memories. And while his special abilities are invaluable in the FBI’s hunt for a serial killer, he has no way to avoid the pain that brings him. Until he is drawn to courageous, down-on-her-luck Evanee Brown and finds himself able to offer her something he’s never offered another human being: himself.

Dawns a unique and powerful love

Nightmares are nothing new to Evanee Brown. But once she meets Lathan, they plummet into the realm of the macabre. Murder victims are reaching from beyond the grave to give Evanee evidence that could help Lathan bring a terrifying killer to justice. Together, they could forge an indomitable partnership to thwart violence, abuse, and death—if they survive the forces that seek to tear them apart.
REVIEW
Hunt the Dawn is the second book in Abbie Roads’ Fatal Dreams series. You do not have to read the first book, Race the Darkness, to understand this one. There are some overlapping characters but their relationships are clearly explained so you don’t really feel like you missed something that happened earlier. The hero in this book was only mentioned briefly in the previous book.

Lathaniel “Lathan” Montgomery collaborates with the FBI on special cases. He does this because he has such an extraordinary sense of smell that he can actually smell your memories. While he is trying to catch a prolific serial killer, Lathan comes across a damsel in distress named Evanee Brown. He rescues her when she is about to be assaulted by her own stepbrother. Although his special ability has always came with a certain level of pain, he notices that when he is around Evanee his world is calm. Conversely, Lathan seems to have a similar effect on Evanee. As they spend more time together, it becomes apparent that Evanee has her own gifts that manifest while she is in a dream state. Together, Lathan and Evanee inadvertently garner the attention of the very serial killer that Lathan has been trying to capture. As he tries to keep her safe, the couple fall in love and establish a bond that can’t be broken.

I really enjoyed Hunt the Dawn. After reading the first one, I was concerned that I may be disappointed since there are similar themes. I was pleasantly surprised. The characters had a lot of depth and it was interesting to see how their unique gifts had an affect on them and their families. I was hoping that the author would write a third book but I think this may be it for this series. I may just have to see what else Abbie Roads has to offer.

**Received a copy of the book for Sourcebooks Casablanca and voluntarily reviewed.**

The Fatal Dreams Series:
(Clicking on the book covers will take you to Amazon.)