Review ~ BURN DOWN THE NIGHT by M. O'Keefe 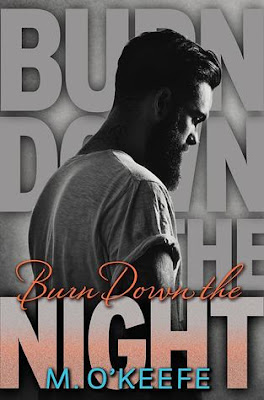 The only thing that matters to me is rescuing my sister from the drug-cooking cult that once enslaved us both. I’ve run cons my whole life, and I’ll use my body to get whatever I need. Max Daniels is the last connection I have to that world, the one person reckless enough to get involved. Besides, now that his brothers have turned on him, he needs me too.

The deal was supposed to be simple: a place to hide in exchange for rescuing my sister. Now he’s my prisoner. Totally at my mercy. But I’m the one captivated. Enthralled. Doing everything he asks of me until I’m not sure who’s in control.

We both crave the heat. The more it hurts, the better. But what if Max wants a different life now, to leave the game . . . to love me? I thought I knew better than to get burned. Now I’m in too deep to pull away. And the crazy thing is . . . I don’t want to.

I would like to say it's a stand alone story, but I don't truly believe it is. You have to read the first two books in the series (Everything I Left Unsaid and The Truth About Him) to understand the character dynamics of Joan, Max, and the rest of the characters.

For months, Joan has been fooling those around her.  She's been biding her time until she was able to get close to others and attempt to rescue her little sister from a cult.  Finally, the time has come to put her plans into motion.  Unfortunately, things don't go according to plan and she ends up kidnapping Max Daniels.

Max is the leader of a motorcycle club.  In fact, he's been a member of the club since he was a teen, following in his father's footsteps.  Max has not always done the right things, but he's slowly trying to change his ways.  In fact, for the last year or so he's been expecting to die. Translation, be killed by members of his own gang, a rival group, or the police.

While Joan holds him prisoner the two realize their attraction for each other.  The two are more alike than they realize.  But Max also realizes he doesn't know who Joan really is.

As the two start to work together to locate and free Joan’s sister, they must rely not only on themselves, but others as well.  Each will risk their lives for those they love, for a payoff they don't think they deserve; a chance at a real life and true happiness.

Burn Down the Night was better than I could have ever expected.  This is a story of sacrifice, courage, determination, family, and love.

Everything I Left Unsaid ~ Review
The Truth About Him ~ Review


Wait for It, the fourth and final book in the series releases February 28, 2017.


You can read my interview with Molly O’Keefe here.