Staring is inspiring by Janel Gradowski 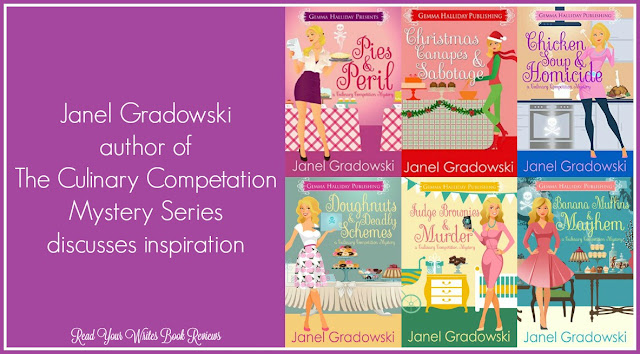 Staring Is Inspiring
By Janel Gradowski

Writing involves a lot of staring. Or at least it does for me. I’m either staring at a computer screen as I’m writing or staring into space trying to figure out what to write.

The process of writing is almost equal parts daydreaming about what I’ll write about and actually writing. I plot my books using index cards, so I know the basics like when and where the scene I’m writing will be set. But I rarely just plunge into writing based off of the information on my index cards. I like to do a bit more planning. The index card notes are the skeleton. I add in muscles by more extensively plotting the scene, in notes in the sidebar of the program I write in – Scrivener. This process helps me write quickly once I stop daydreaming and begin. All of those notes also come in handy for getting back into writing after being interrupted. I have two kids and a dog - interruptions happen in my life as an author.

I have a beautiful, roll top desk in my bedroom that I sometimes write at. More often, though, I write in the living room. My chair faces two things that often give me ideas that end up in my books, as I look away from my laptop screen to ponder what I’m going to write.

There is a field across the road from my house. In the winter I watch deer rooting around in the snow looking for remnants of the crop. In the spring and summer the plants waving in the wind is rather mesmerizing. But the most fascinating things right now are my hummingbird and oriole feeders. They get much use as a variety of birds eat or just hang out. Sometimes there is a group patiently waiting to take turns at the feeder, cheerfully chattering. At other times there are flat out fights with squawking, wing flapping, and grandstanding. Avian behaviors that can easily translate into how the characters in my books interact with each other.

While I often write in silence or while listening to music, sometimes I turn on the television. I love watching cooking shows – everything from brunch fare to funky food traditions from around the world. Since I write culinary cozies there is a lot of food mentioned in my books. If I happen to be watching TV on a writing day, often some version of dishes that are being profiled on the shows end up in what I’m writing.

Composing my thoughts, by looking away from my computer screen, is a necessary step in my writing process. It’s always a bonus when whatever I look at provides inspiration. There truly is inspiration everywhere, as long as you remember to look for it.

Pies & Peril
When Amy Ridley decided to compete in the Kellerton Summer Festival Pie Contest, the last thing she expected was to find the reigning pie queen, Mandy Jo, dead—a raspberry pie smashed on her face! Mandy Jo made fantastic pies, but she accumulated more enemies than baking trophies. But when Amy receives a note threatening her own life, she decides to do some investigating herself.

Christmas Canapés & Sabotage
Amy Ridley is excited to be participating in the Holiday Celebrations Competition to kick off her Christmas season in Kellerton, Michigan. Local cooks are set to compete for prizes then serve their best party dishes to holiday revelers. Amy has her eye on a special prize, but she has a difficult time concentrating on creating a perfect party buffet when a plague of problems begins to whirl around her. Can Amy figure out who is sabotaging the competition in time to create a prize-winning tablescape and take home the ultimate Christmas gift?

Chicken Soup & Homicide
Amy Ridley and her friend, Sophie, have perfected their chicken soup recipe, and the winter-weary residents of Kellerton, Michigan can't wait to watch them compete against other local chefs in the Chicken Soup Showdown. But the charity event starts out with a bang, literally, when one of the rival chefs falls out of a freezer and onto Amy. If it wasn't stressful enough for Amy to catch a dead body, the detective in charge of the investigation targets her best friend, Carla, as the chief suspect in the murder.

Doughnuts & Deadly Schemes
Amy Ridley’s best friend, Carla, is getting married, and Amy is delighted to be recruited as the head wedding planner—even if Carla's demands are less than conventional. Case in point: Carla insists on a tower of doughnuts in place of a wedding cake. But navigating the world of nuptials becomes the least of Amy's problems when the owner of a menswear shop is found dead, and Carla's fiancée is assigned to the case. With the honeymoon in jeopardy, Amy and Carla vow to help track down the killer...but they soon discover there are even more sinister happenings affecting the businesses in downtown Kellerton, Michigan. If Amy doesn't figure out who is behind the deadly schemes, the nearly newlywed detective may just be solving another murder—hers!

Fudge Brownies & Murder
Culinary whiz and reluctant amateur sleuth, Amy Ridley, has a lot on her plate. Her very pregnant best friend, Carla, can barely move from her couch per doctor's orders. So Amy is tasked with preparing meals for the expanding family along with baking endless pans of brownies to quench Carla's pregnancy cravings. Not only is she playing chef, but she's also trying to convince the mommy-to-be that she needs to have a baby shower. But when a restaurant owner is murdered at a blogging conference, Amy finds herself in a race to catch the killer before the baby is born.

As Carla's baby bump gets bigger, so does the list of suspects. While Amy pares down the potential murderers and staves off disgruntled cooking competition rivals, the clock ticks down, the baby's arrival draws closer, and the danger grows stronger! If Amy doesn't watch her back, she may be the next member of the competition going down.

Banana Muffins & Mayhem
Culinary competitor Amy Ridley is as excited as anyone in Kellerton, Michigan to have DIY Home Improvement star, Phoebe Plymouth, come to town for the first annual Cabin Fever Cure event. However the TV personality’s sour attitude quickly curdles people’s opinion of her. When she’s found dead, at the business owned by Amy’s husband, Alex, the heat is on to catch the killer before his professional reputation is ruined!