Cozy Mystery Review ~ THE SILENCE OF THE FLANS by Laura Bradford 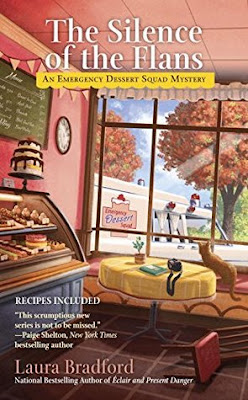 Baker Winnie Johnson does her best work when the heat is on. As owner of the Emergency Dessert Squad, she has a deft touch in the kitchen and a soft spot for lost causes. So when her business professor beau, Jay Morgan, expresses misgivings over having to fail one of his fourth-year students, Winnie cooks up a sweet solution.

She'll offer an extra credit opportunity in exchange for a little help with her growing business. But when her protege's first dessert delivery poisons a student journalist, the publicity threatens to burn Winnie's business to a crisp. Now the entrepreneur-turned-detective must uncover the ingredients behind a recipe for murder before she crumbles under pressure...

Things are finally going good with Winnie and her new beau, college professor Jay Morgan. Unfortunately, Jay has been acting a little distant and withdrawn of late.  When Winnie finds out Jay is worried about one of his students (Alicia Worth) failing and possibly not graduating, she offers to take Alicia under her wing for three weeks, in exchange for the girl getting a passing grade.

Melinda B. Tully is a journalism student who writes for Caughtcha a college newspaper at Silver Lake College.  Melinda is known for her hard hitting investigative skills.  In the past three years, she’s written major stories about gambling, cheating, and corruption at the school.  Just weeks from graduating, she’s in the middle of investigating a story that could send shockwaves through the college once again.  Unfortunately, before she can publish her findings and graduate she’s murdered.  The fact that she dies within minutes of eating a blueberry pie points directly to Winnie.

While Winnie knows that she didn’t do anything to kill Melinda, people around town aren’t so sure.  Business is suffering and she has to find out what really happened before it’s too late.  While she has the support of her friend Renee, her neighbors Bridget O’Keefe and Parker Nelson, and even “Master Sergeant Hottie” paramedic Greg, she doesn’t seem to have the support of her boyfriend Jay.  Just when she needs his support the most, he seems to be avoiding her.  Even Alicia is avoiding her.  She’s pretending to be the victim’s friend when just hours before, she proclaimed how much she didn’t like Melinda.

Winnie ultimately sets out to clear her name by finding out just who had it out for Melinda and why.  To do so, she enlists the help of her friends and gets her hand on Melinda’s current research notes.  Uncovering the truth is going to be more surprising than anyone could have imagined and Winnie’s life will get put in jeopardy.

I’m loving the Emergency Dessert Squad series.  Laura has created a world with wonderful characters who are not only friends, but family.  They all look out for each other and always have each other’s backs.  I loved all the red herrings thrown into this mystery.  Just when you think the story is going to go one way, it goes another.  I wasn’t happy with the Jay storyline and with the way it played out.  I also think the killer reveal should have been just a little bit more intense.  It seems as if it was just glossed over.  The recipes in the back of the book sound amazing.  I am definitely looking forward to the next book in this series.

**Received a copy from Berkley Prime Crime and reviewed the book voluntarily.**

The Emergency Dessert Squad Series:
(Clicking on the book covers will take you to Amazon.)