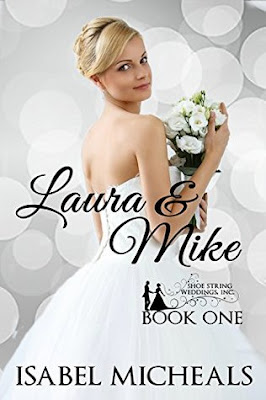 Laura and Mike want a simple, yet elegant outdoor wedding that expresses their love for one another. Six months in and they’re over budget with an out of control wedding planner who’s looking to make a name for herself among the social elite in Austin.

Groom Mike Landry has had enough and intends to put the overbearing woman in her place. But when things go awry and they’re unable to find common ground, he finds himself without a wedding planner.

Desperate for a solution and at the suggestion of a friend, he hires the services of Shoe String Weddings, Inc. Problem solved. Or so he thinks. When once again their wedding plans implode, it’ll take everything Jacqueline Whitmore and her merry band of misfits have up their sleeves to help Laura and Mike make it down the aisle.

Tempers will rise. Old lovers will emerge. One wedding planner will throw down the gauntlet. And the city of Austin, Texas will never be the same. So, hold on to your seat because this is going to be one bumpy ride to Happily Ever After.

Laura & Mike is different from any other book I’ve read by Isabel Micheals.  The story is told in third person, with secondary characters at times allowing the readers to know what they’re thinking.

For me personally, the blurb doesn’t do the book justice and truly tell you what to expect.  I was expecting a romance with some comedy involved and just a little dash of drama.  I got the romance, which I loved.  I didn't have laugh out loud moments.  There was however, DRAMA on top of drama.  It was unexpected and over the top.  The added surprise of a little suspense was a nice touch.

Laura Matthews and Mike Landry are in the midst of planning their dream wedding on a modest budget.  Their wedding planner, Renae Fairmont came highly recommended.  Her planning has put them over budget and they still have a lot to work out.  After Mike receives a bill for an item they never asked for, he decides to confront Renae.  Things get out of hand and Mike ends up firing her.  However, “Renae Fairmont has never been fired by anyone…. I quit because I can’t work for someone who doesn’t appreciate my hard work and creativity.”

As I mentioned, there were definitely things about the book I liked/loved. Isabel is a good author with a good voice.  The story was easy to follow,  even if it did get my dandruff up a time or two or ten.  The characters of Laura, Mike, Jacqueline, and the rest of their friends and employees were very likeable.  The romance is kicked up a bit.  The suspense was nice and surprising.  I just didn't like the excessive amount of wedding planner drama.  This might not have been such a huge issue for me if I knew going in it was there.   With that said…..I now know what to expect and I’m looking forward to the next book. After years of reading romance novels and getting lost in characters’ worlds, Isabel Micheals finally decided to try her hand at writing. Inspired by Lucy Kevin’s Four Weddings and a Fiasco, she summoned her courage, got to writing, and submitted her first novel, The Wedding Chaos, to Ms. Kevin’s Kindle World. Now she’s been bitten by the writing bug and hopes to make a career of it. Isabel encourages you to join her on this amazing and exciting journey as the characters in her head come to life.