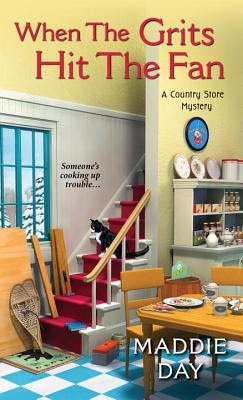 Despite the bitter winter in South Lick, Indiana, business is still hot at Robbie Jordan’s restaurant. But when another murder rattles the small town, can Robbie defrost the motives of a cold-blooded killer?

Before she started hosting dinners for Indiana University’s Sociology Department at Pans ‘N Pancakes, Robbie never imagined scholarly meetings could be so hostile. It’s all due to Professor Charles Stilton, who seems to thrive on heated exchanges with his peers and underlings, and tensions flare one night after he disrespects Robbie’s friend, graduate student Lou. So when Robbie and Lou go snowshoeing the next morning and find the contentious academic frozen under ice, police suspect Lou might have killed him after their public tiff. To prove her friend’s innocence, Robbie is absorbing local gossip about Professor Stilton’s past and developing her own thesis on the homicide—even if that means stirring up terrible danger for herself along the way . . .

Maddie Day is one of my favorite cozy mystery authors.  Her Country Store Mystery series is definitely one of my favorite series.  All the main and permanent secondary characters are all people I would love to know.  There isn’t anything I can say about this book that I haven’t already said about the two previous books.

When the Grits Hit the Fan is a standalone read and the third book in the series.  To say this book is full of surprises is an understatement.  Once again, Robbie Jordan finds herself in the middle of a murder investigation.  Her friend and cycling buddy, Lou Perlman, is a prime suspect in the death of Professor Charles Stilton.  Lou and Charles have a very public and heated argument over Charles stealing her research and passing it on as his own.  The next day, Robbie and Lou find Charles’ body frozen under a lake.  When Lou says that she didn’t kill him, Robbie is quick to back her up but the police aren’t so sure.  Robbie refuses to allow her friend to take the blame and vows to find out who the real killer is.

As if catching a killer isn’t enough to keep Robbie busy, she’s running herself crazy with the uptake in business at Pans ‘N Pancakes, demolishing the upstairs of her building, and spending more time with her boyfriend Abe O’Neill.  She isn’t looking for someone to break into her building, threaten her, and attempt to kill.  But it all happens.  To save her life, Abe is going to have to risk his own to catch a killer.

I loved When the Grits Hit the Fan.  I loved playing ameuter slueth along side Robbie, trying to figure out who the killer was.   The way Maddie connected all the dots at the end to show how and why Charles was killed was incredible.  I definitely had several “I didn’t see that coming moments.”  I’m really happy with the way Robbie and Abe’s relationship is progressing.  When the Grits Hit the Fan is one of those books that once you pick it up, you aren’t going to want to put down.  I’m in awe of Maddie Day for having the ability to time after time put together mysteries that keep readers guessing and leave them wanting more.

Purchase When the Grits Hit the Fan from:
Amazon | Barnes & Noble | IndieBound | Goodreads