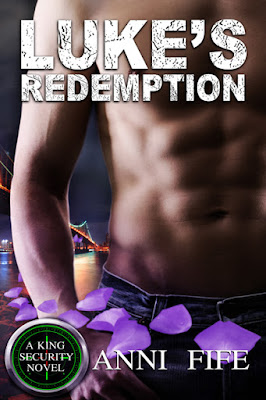 Chased by her criminal kingpin father, Katya Dalca runs to New Orleans and straight into the arms of Luke Hunter. Sucked into the carnal world of the French Quarter, she succumbs to Luke’s potent sexuality. He not only steals her breath, he steals her heart and the only leverage she has against her father. She is left with no choice except to pick up the pieces and rebuild her life alone.

Undercover DEA agent Luke Hunter thought his newest assignment—recover a stolen flash drive to gain the trust of the Russian mob—was like any other. But his target brings him to his knees, and after one taste of her intoxicating beauty, he's in too deep. Doing his job means walking away, leaving his heart behind with nothing but a promise to reunite. It's a promise he can't keep.

When Katya's past reaches out and her world unravels, her only hope is the one man she is most vulnerable to—Luke.

Tell me about the backgrounds of Luke and Katya.
Luke and Katya learn about each other’s difficult backgrounds midway through the book in a very intimate setting. So, I don’t want to give too much away or it will spoil the story for your readers. But I can tell you a little...

I created LUKE HUNTER in the image of Chris Hemsworth’s Thor character. Yummy! But besides his panty-melting good looks, Luke is also a man who feels deeply and loves with an all-consuming intensity. The abuse and loss he suffered in his early years, shapes the man he becomes. He has a singular focus that makes him a superior sniper in the military, and his protective instincts are through the roof. Luke has no problem using his potent sexiness to his benefit. But when confronted with Katya’s pain and fear, we discover he has a depth of emotional intelligence that will bring you to tears. Well, it brings me to tears every time I read it!

When KATYA DALCA was ten years old, she lived an idyllic life in Westchester, safe in the knowledge that her father adored her and would always protect her. But her world exploded when her mother was murdered and her father sent her away to live with her grandparents. This event and its aftermath, left Katya with a deep sense of betrayal and abandonment, inner demons that continue to plague her into adulthood. When she meets Luke, and he betrays her not once, but twice, she is forced to face her worst nightmare. I loved watching Katya grow and learn to overcome her fears. She is a woman who loves deeply, and fearlessly. But for her to win her happily ever after with Luke, she has to learn the biggest lesson of all—to forgive.

Why did you choose to have the storyline play out for such a long time?
I did this deliberately because when Katya and Luke first meet, neither is emotionally equipped for a committed relationship. Katya is only twenty-three, and running from a father who offers her protection in place of love. Her view of what family should be is idealistic, cushioned in her childish memory of a fairytale life. Luke is focused only on the mission. His worldview is rigid, and his biggest fear is if he gives into emotion, he will fail those who rely on him. Both need more time to live, and to learn what is truly important in life. The journey of living and losing teaches us that life is rarely black and white. Rather, we live in the grey areas in between. And it is here where we learn to love unconditionally, and to forgive those who have hurt us, and even betrayed us.

Tell me about King Security?  Who created it and how was it founded?
King Security is owned by Thane ‘King’ Kingsley. He’s in his early forties, and obviously stinking rich, but the rest of King’s story is shrouded in mystery. With his British brogue, and serious combat skills, he’s a powerful persona who runs his team with an iron fist. In Luke’s Redemption he has no compunction using Katya as bait to catch the man stalking her, something that sends Luke off the deep end. But he also saves the day. In Gray’s Promise, the next in the series coming later this year, we get a deeper insight into King as he rallies alongside Gray’s lady-love, Zoey. But to learn more about this complicated man, we’ll have to wait for his story.

How many books do you have planned for the series and what can readers expect in the future?
The next story is Gray’s Promise, and I’m delighted to report that I’m busy editing it now. It’s set in New York and Denton, Texas. Grayson Walker is Luke’s best friend, and he’s a wicked charmer. Zoey Morgan is his one-and-only. Torn apart by horrific tragedy, Gray and Zoey still carry the emotional scars fourteen years later. We follow their fraught reconciliation, and the unknown evil stalking them. Their journey is filled with pain, and a heart-wrenching beauty. And, of course, sexual chemistry so scorching it still gets me in a hot sweat when I think about it.

Next in line, is the heartbreaking story of Scarlett Eva Young. She is the team’s profiler, and a real dark horse. Right now, I have six books in mind for the King Security Series, with perhaps a novella or two. But you never know who might crop up, begging me for their own epic Happily Ever After.

We pulled into the underground parking at King Security and Luke parked the SUV in line with several other huge black Ford Expeditions. It appeared King Security had its own fleet.

Unable to stop myself, I blurted, “You were with Anna when you were undercover with my father, weren’t you?”

Luke pulled the keys from the ignition. In the deafening silence I didn’t think he was going to answer. Then he turned to me and bit out. “Yes!”

Wow! I didn’t expect him to be so honest. I sat back and folded my arms, tight. Damn, his answer hurt me. “So you make a habit of lying to your women? Being with them while you’re pretending to be someone you’re not? Is that your thing?”

“She wasn’t my woman,” Luke growled. “She was just a woman. She was there, I was there. It was never deep and it sure as hell wasn’t forever. Then it was over, and I made certain she was clear of the investigation. That was it.” He leaned towards me and said impatiently, “That tell you what you want to know?”

“Not even close. You made love to her didn’t you?”

“Hell no!” Luke snarled. “I fucked her. Like I have all the other women in my life. There’s only one woman I ever made love to Katya. And that was you.”

I went rigid, stunned into silence. Luke turned to open his car door. “You didn’t make love to me, Michael did,” I whispered.

You can read Gemini’s 5 Star review of Luke’s Redemption here.

Last year, Anni Fife closed the door on a successful career in television, to fulfill her lifelong passion, writing. In the space of one month, she closed her business, packed up her city life and moved to a small seaside village. ‘My writing has always been constrained by client briefs,’ Anni says. ‘Now, I finally have the opportunity to write to the beat of my own heart.’ LUKE’s Redemption is Anni’s debut novel and she hopes you enjoy reading it as much as she loved writing it. Anni loves to spend hours walking on the beach searching for pansy shells, more hours drinking red wine with her gal posse, and the most hours writing steamy romance novels filled with hot alpha men and the sassy intelligent women they can’t live without. She is currently working on her second novel, GRAY’s Promise.