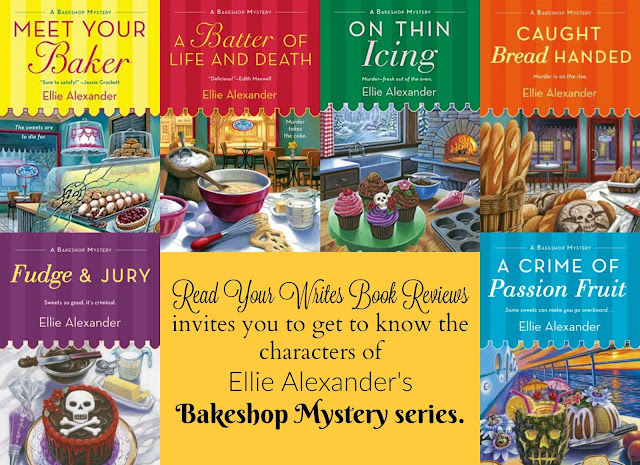 Ellie Alexander’s Bakeshop Mystery series from St. Martin’s Press is one of my favorite cozy mystery series. The series takes place in the real town of Ashland, Oregon, located in the southern most corner of the state near the border of California and is surrounded by the Cascade and Siskiyou Mountains, rivers, lakes, and forests. Sounds beautiful right? Ellie does an incredible job of making readers want to visit the town. Not only does Ellie’s writing keep me wanting more of the series, but the characters who make up the series do as well. The characters are great and I wish they were real, so I could visit with them.

Ellie has graciously agreed to give us the rundown of the characters who work for Torte, this wonderful bakeshop, and some others that you’ll see around town.

Thanks so much for having me on as a guest. I’m thrilled to get a chance to introduce readers to the team at Torte, the family-run bakeshop in my Bakeshop Mystery series.

Juliet Montague Capshaw (but please call her Jules)—a talented pastry chef who has spent a decade crafting her delicate and delectable pastries on a high-end cruise ship. She has returned home to her charming childhood town of Ashland, Oregon to help her mom run their family bakeshop Torte. Jules blames her romantic tendencies on her name and the fact that she grew up surrounded by playwrights, actors, and artists. Ashland is home to the world-famous Oregon Shakespeare Festival and the entire town is themed like an old-English village.

Helen Capshaw—Jules’s mom and the owner of Torte. Helen has made Torte so much more than just a bakeshop. She treats every customer who walks through the front door like family and is known for her calm demeanor and listening ear. People come into Torte for a steaming latte, a warm cherry scone and for Helen’s wise advice. Helen is thrilled to have Jules home again. Although ironically while her daughter’s love life is crumbling, Helen’s is just beginning to blossom.

Carlos—a Latin chef who believes that food is a love language. He and Jules met onboard the ship. Jules was swept up by his sultry accent and spicy food. They married on a whim while in port in Marseilles. Their time on the ship had been magical, sailing to tropical ports and drinking wine under the stars on sandy beaches, but that all changed when Jules learned that Carlos had been lying to her. She left him on the ship and cocooned herself in Ashland. Carlos has been trying to win her back ever since.

Thomas—Jules’s high school boyfriend and Ashland’s young detective. He’s lived in Ashland his entire life. When Jules left for culinary school it left him brokenhearted. He’s been carrying a torch for her ever since. Having her home again has been equally wonderful and unsettling. His feelings for her have resurfaced, but he knows that she’s in the middle of figuring out what’s next and doesn’t want to confuse her more.

Lance—the artistic director at the Oregon Shakespeare Festival (OSF). Lance is OSF. He lives and breathes the theater. He has a flair for the dramatic and impeccable fashion sense. His three-piece suits and ascots set him apart from everyone else in laid-back Ashland. While Lance likes to make light of the murder investigations that Jules stumbles upon, he has a deep and serious side that very few people get to see. Fortunately, Jules is one of those people. She and Lance have developed a friendship based upon mutual respect and their inquisitive nature.

Sterling—Torte’s chef in training. Sterling is wise beyond his years. At first glance he looks like a skater dude with his tattoos, hoodie, dark hair, and piercing blue eyes. But beneath his bad-boy style, Sterling has the heart of poet. He dabbles in writing, is a natural in the kitchen, and has a serious crush on Stephanie. Even though groups of young girls come into Torte every day to swoon over Sterling, he only has eyes for one woman.

Doug “The Professor”—Ashland’s resident detective and Shakespeare aficionado. Known as the Professor, Doug moonlights as an actor in community theater when he’s not on a murder case. He likes to quote Shakespeare and wears a tweed jacket instead of a police uniform. His calm and grounding presence puts everyone at ease. He has been courting Helen, and Jules keeps wondering if wedding bells are in their future.

Richard Lord—Ashland’s self-proclaimed leader. He owns a rundown hotel, The Merry Windsor, across the street from Torte, and likes to lord over everyone in town. Richard wears ridiculous golf outfits that are meant for someone half his size. He holds court on the front porch of The Merry Windsor and is the biggest gossip in town. He and Jules took an instant dislike to each other. That hasn’t changed since she’s put down roots in Ashland. Richard Lord is her biggest nemesis, and Jules must constantly keep watch to see what evil plan he has in store next.

Andy—Torte’s young barista. Andy is a college student at Southern Oregon University. He plays football and loves coffee. Despite his young age, he’s a whiz at creating crazy concoctions and handcrafting latte art. Andy is jovial and can chat with anyone who comes into Torte. He’s a team player and is always willing to jump in and help with anything that Jules and Helen need.

Stephanie—Torte’s pastry protégé. Like Sterling, Stephanie comes across as aloof. She dresses like a goth with bright purple hair. The girl can bake, though. Jules and Helen have taken Stephanie under their wing and are teaching her everything they know about pastry. She’s a quick study and is well-suited to working in the back where she doesn’t have to interact with the customers.

Rosalind Gates—the head of Ashland’s downtown business community. Rosalind loves Ashland and will do anything to preserve its charm. She’s helped put standards in place that ensure every business in the plaza must adhere to a Shakespearean design esthetic. She’s also a champion of small, family businesses like Torte. Her goal is to make sure that Ashland stays Shakespearean and that Torte thrives.

Now that you’ve had a chance to get to know the characters a little bit, check out this wonderful series.  I promise you won’t be disappointed.