Review ~ FALLING FOR THE BAD GIRL by Nina Croft 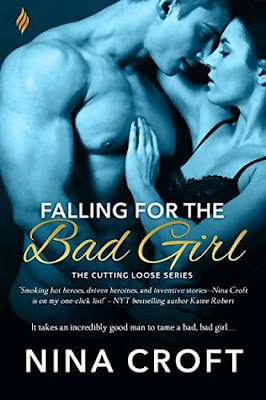 As a second generation detective, Nathan Carter is a cop, through and through, one who definitely sees things in black and white. But his work ethic—and libido—are thrown off balance when he heads up the case against jewel thief, Regan Malloy. Because with one sizzling look, she’s got him hot and hard. And he’s been that way, ever since.

Growing up, Regan’s favorite hobby was learning to crack safes, and she was very, very good at it. Still, she’d always tried to keep to the straight and narrow, and only strayed when she believed a friend was in desperate straits. Now she’s out of prison and starting over. If only she could forget that she’d spent the last three years fantasizing about the stunningly gorgeous detective who locked her away.

It’s inevitable that they meet up again—in bars, hotels…and hotel beds. Despite their differences, they can’t keep their hands off each other. Still, it’s just desire. If they give it enough time, it’ll burn itself out. Because a good boy and a bad girl can’t possibly make it work. Can they?
REVIEW
Falling for the Bad Girl marks my first time reading a book by Nina Croft.  I was pleasantly surprised to discover that the book takes place in England.

Immediately, I was intrigued by the characters of Regan Malloy and Detective Sergeant Nathan Carter.  These two have a history going back three years, to when Nate arrested Regan and helped to send her to prison.  For some inexplicable reason, these two are drawn to each other.

The day of Regan’s release from prison, the two meet up in a bar.  This isn’t a planned meeting, it just happens.  Regan and Nate agree to one night, to get each other out of their system.  Only they discover one night isn’t enough.  The two embark on a secret sex only relationship with an expiration date.  They both know that a true relationship with each other is out of the question.  Nate is from a cop family and Regan’s entire family is known to be successful thieves.  They are truly a recipe for disaster, but surprisingly, they work.

I won’t deny that at times, I questioned the actions of both Regan and Nate.  There were definitely times I questioned if their feelings were true.  But in the end, readers are treated to what these two will really do for each other and for love.

While I liked Regan and Nate, I loved several of the secondary characters.  Regan’s older brother is interesting, with his anti-cop mentality and charm to spare.  Regan’s roommates, Summer and Darcy, whom she met in prison, added to this story as well.  Summer’s character seems to have secrets just waiting to be revealed.  Darcy appears to be preparing to make waves and connect with a family member.  Without question, I’m looking forward to having her story told.