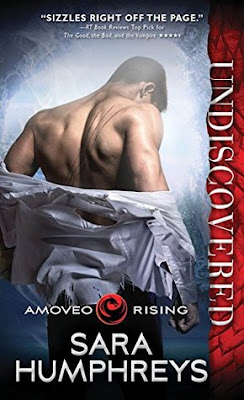 He's the man of her dreams
A long time ago, Zander Lorens was cursed to walk the earth stripped of his Dragon Clan powers. Every night, trapped in a recurring nightmare, Zander relives his darkest moment. He can hardly believe it when the dream changes and a beautiful young woman appears. Zander believes she's the key to ending his torment. Finding her in the real world is one thing, but how will he convince her of who-and what-she really is?

She's the end to his nightmare
Rena McHale uses her unique sensitivity as a private investigator, touting herself as a "human divining rod" and finder of the lost. By day she struggles with sensory overload, and by night her sleep is haunted by a fiery dragon shifter. Nothing in her life makes sense, until the man from her dreams shows up at her door with a proposition...
REVIEW
I have read several books by Sara Humphreys and I love her paranormal interpretations, especially when it comes to vampires and shapeshifters. In Undiscovered, she continues her intriguing interpretations of shapeshifters that she calls Amoveo as well as an introduction to a rare species of Dragon shapeshifters.

Zander Lorens has lived in utter agony for the past 500 years because of a curse that made him immortal yet unable to use his Dragon powers. Plus, his twin brother has been stuck in hibernation for 500 years. They both have been cursed to re-live a tragic event every night of their existence. A chance encounter with a woman named Rena McHale during one of these dreams leads Zander on a path to end the curse and free both himself and his brother, Zed. Unbeknownst to Rena, she is part Amoveo and has some amazing abilities yet to be discovered although she does use one gift as a private investigator. She can locate anyone just by touching something that belongs to them. When Zander locates Rena in Las Vegas, he opens her up to an entire new world and also opens up her heart. Unfortunately, Zander is convinced that Rena is meant to be his brother Zed’s mate so he denies the strong attraction that he has to her. Rena, on the other hand, has other plans and insists that fate can’t determine who she falls in love with.

It was interesting to watch Rena find out what she really is after living her life as an orphan and believing that she was some sort of freak. However, it was painful to see how Zander has been literally tortured for centuries and has taken the blame for everything that happened to him and his brother. I will also have to say that parts of the book were a little too predictable. I wish that Sara had thrown in a plot twist or two but I still enjoyed the book. Rena and Zander were good for each other.