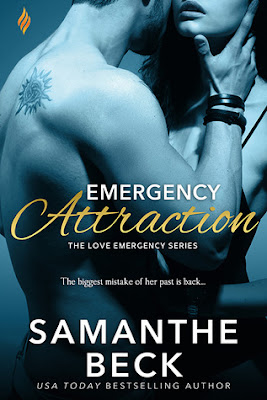 The biggest mistake of her past is back...

Ten years ago when Shane Maguire chose the Marines as his escape from some trouble of his own making, he only regretted one thing—leaving Sinclair Smith behind. Despite his best intentions, she ended up as the one that got away. Now he’s back, determined to reclaim everything he gave up, including Sinclair.

Sinclair is immune to Shane’s charms. She’s immune to stolen kisses behind the gym. And she’s definitely immune to that maneuver he did in the back seat of his car… Okay, maybe her hormones are susceptible, but she has absolutely no desire to risk anything on the bad boy who broke all his promises.

When a little emergency lands her at his mercy, he offers her a deal she can’t refuse. And this time, she’ll show Shane what it means to be left wanting…

I’m a fan of Samanthe Beck.  She always, always writes heroes I want to fall in love with and heroines I would love to be friends with.  The men and women of her Love Emergency series have been incredible with their easy going attitudes, strong wills, passion, and love. What has surprised me about this series is that not only has Samanthe added passion and heat, but she has thrown in heartbreaking moments.

Emergency Attraction is the second chance love story of Shane Maguire and Sinclair Smith. Ten years ago, an eighteen-year-old Shane left sixteen- year-old Sinclair and his troubles in Magnolia Grove, Georgia behind to join the Marines.  He promised that he would contact her and that they would be together.  After months of not hearing from him, Sinclair’s trust was broken.  But in the process she lost more than anyone could imagine.

Fast forward ten years and Shane is all grown up, mature, and a different person.  Oh, his urge to help people is still a part of him.  He just uses it in his job as VP of Disaster Planning and Crisis Management for Haggerty Consulting.  Shane’s company is hired to implement an emergency plan for Magnolia Grove and he is sent because of his knowledge of the town. Not only does Shane want to show people he isn’t anything like his criminal brother, but he also wants to reconnect with Sinclair “the one who got away”.

Sinclair has no intention of letting Shane back into her life.  But Shane is definitely persistent, taking her on tours of their past haunts.  These tours are a way for him and Sinclair to reconnect not only physically, but emotionally.  As it turns out, while these two knew so much about each other, there are some things they don’t know.

What started out as childhood love has blossomed and remained strong, even with time and distance.  Like the roots of a willow tree, the love of Sinclair and Shane is deeply rooted and strong enough to withstand any storm rained down on them.

When it comes to romances for me, I always look for a hero I can fall in love with easily, one who makes me laugh, smile, and sigh.  Shane is all that and then some.  He might make some mistakes but he tries very hard to keep his word.  Sinclair and Shane have a passion that isn’t easy to ignore.  The secondary characters add tissue-worthy moments and definitely add to the story.

It should be noted that this is a standalone read, with past couples returning.

**Received a copy from Entangled Publishing and reviewed the book voluntarily.**


The Love Emergency Series:
(Clicking the book covers will take you to Amazon.)