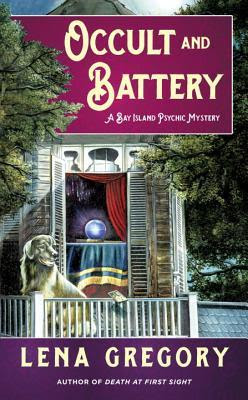 A murder mystery weekend becomes a little too real in the latest Bay Island Psychic Mystery from the author of Death at First Sight—Cass Donovan uses her skills as a former psychiatrist to get away with pretending to be psychic, but she’s not about to let anyone get away with murder...
The outlook is not so good for Cass’s psychic shop, Mystical Musings. With winter winds discouraging tourists from riding the ferry from Long Island to Bay Island, Cass hopes to draw in more customers by hosting a murder mystery weekend, complete with a séance, in a supposedly haunted mansion.But Cass begins to lose her spirit when her ex-husband shows up, along with his fiancée—Cass’s ex-best friend. Then, after one of the guests is found dead, a blizzard blows in, trapping everyone inside with a murderer. Now Cass must divine who did the deed before her reputation and her livelihood fade away.

“Oh, what a tangled web we weave...When first we practice to deceive.” ~ Walter Scott

After her world implodes with the death of a patient and finding her husband and best friend in a compromising position, Psychiatrist Cass Donovan leaves everything in Manhattan behind and returns to her childhood hometown of Bay Island, New York.  Not wanting to be responsible for anyone, Cass becomes a psychic and opens her shop, Mystical Musings.

Since it’s winter time, there aren’t a lot of tourists coming to the island.  Cass has this brilliant idea to rent the supposedly haunted Madison estate from the firm of Wellington, Wellington and Wellington and host a group reading.  Once Priscilla Wellington hears what Cass wants to do, she suggests that Cass turn the one night reading into a weekend event. Her plan is to have the weekend event coincide with the soft opening of the B&B, which the firm will turn the estate into.  Cass is excited and thrilled until she learns that her ex-husband Donald and her ex-best friend Sylvia are attending the event weekend.

Cass is determined not to allow the exes to bring her down.  She focuses her attention on doing the best séance there ever was.  But much to her surprise, the séance actually calls forth the ghost of a previous resident.  Power is knocked out and a horrible blizzard traps everyone at the estate.  As if being trapped with strangers and her exes isn’t enough, everyone is awaken to find one of the Wellingtons dead in the cupola.

Lena Gregory has weaved together an imaginative story full of lies and deception.  This is a story where everyone is hiding something and no one can be trusted.  I loved that the story kept me guessing to the very end, with more than one surprise.  I also loved that Lena has written a story that allows her core characters of Cass, Bee, and Stephanie to shine.  I’m looking forward to the next book, Clairvoyant and Present Danger coming February 2018.
**Received a copy from the Penguin ~ Berkley Prime Crime and reviewed the book voluntarily.**

You can read an excerpt of Occult and Battery here.