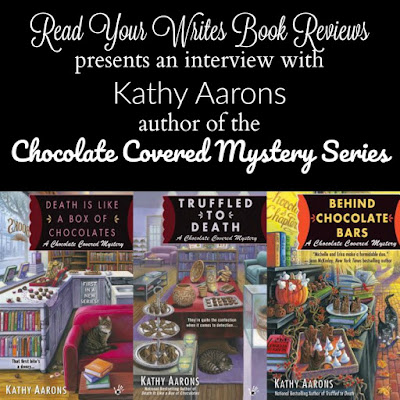 Hi Kathy.  Welcome to Read Your Writes Book Reviews.  How are you?
Good – thanks!

I’m a fan of your Chocolate Covered Mystery series from Berkley.  Michele and Erica are so fun.  Can you please tell readers who don’t know about this series and its characters about them?
Michelle Serrano is a chocolatier who has a passion for making all things chocolate. She believes she’s providing happiness in little bites to her customers. Her BFF, housemate, and business partner is Erica Russell, a highly educated intellectual who left the world of academia to manage her family’s bookstore. Together, they own Chocolates and Chapters, a combination bookstore and chocolate shop – the best combo ever.

They also complement each other’s skills to solve murders in the small fictional town of West Riverdale, Maryland.

The books contain chocolate recipes.  Do you ever make those recipes yourself?
I do! Isabella Knack, owner of Dallmann’s Chocolates in San Diego, provides the recipes, and I am contractually forced to test them before they go to print. It’s a burden I must bear. Isabella’s truffles are works of art. Mine are little lumps of ugly deliciousness.

You’re making me hungry!  You currently have three books in the Chocolate Covered Mystery series.  Will there be more?
The series is complete at three books. Readers have told me BEHIND CHOCOLATE BARS provides a satisfying ending that leaves one or two ideas open in the event Berkley Prime Crime wants a fourth.

And just like that, you have broken my heart.  Sigh….Later this year, you have a new series coming out from Kensington: Lyrical Underground, under the name Kathy Krevat.  What can you tell me about The Trouble with Murder and the Gourmet Cat Mystery series?
I’m having a wonderful time writing The Gourmet Cat Mystery series about organic cat food chef Colbie Summers and her finicky cat Trouble. Here’s the very cute cover copy:

Single mom and gourmet cat food entrepreneur Colbie Summers thought she’d escaped her tiny California hometown forever. But when her father needs her, she packs up her adolescent son, their finicky feline, Trouble, and her budding business. She knows change is tough—but she doesn’t expect it to be murder . . .

Between dealing with her newly rural life, her grumpy, sports-obsessed father, and preparing to showcase her products in the local Sunnyside Power Mom’s trade show, Colbie has more on her plate than she bargained for. Luckily, she has her official taste-tester, Trouble, by her side to vet her Meowio Batali Gourmet Cat Food line. Things look promising—until one of the Power Moms is found dead—with an engraved Meowio specialty knife buried in her chest.

As the prime suspect, Colbie needs paws on the ground to smoke out who had means, motive, and opportunity among the networking mothers—including a husband-stealing Sofia Vergara lookalike. And the cat’s still not out of the bag when a second violent death rocks the bucolic community. Trouble may have nine lives, but Colbie’s only got one to clear her name and stop a killer from pulling off the purr-fect crime . . .

Sounds good.  What’s your favorite part about writing a cozy mystery?
I love writing the cast of quirky characters and creating the small town setting. I’m writing the second book in the Gourmet Cat series – THE TROUBLE WITH TRUTH -- and it’s so much fun to revisit everyone!

Kathy, thank you for taking time to answer some questions for me.
Thank you so much for having me on your blog!

The Trouble with Murder releases December 12, 2017.
Until then, check out the Chocolate Covered Mystery Series. 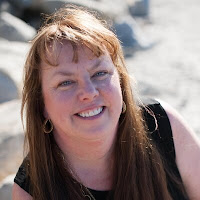 Kathy grew up in rural Pennsylvania, attended Carnegie Mellon University, and moved to New York City where she built her career in public relations and met her husband. They relocated to California where she became one of “those” moms: running the PTA, fundraising for school foundations, helping with a high school writers conference, creating costumes for youth theater, building puppets, and cheering on her daughters in hundreds of swim meets and soccer and basketball games.

She began writing when her youngest daughter attended school five days a week and pursued publishing more seriously when her oldest daughter went off to college.

She now lives in San Diego with her husband and two daughters where she wakes up far too early, and is currently obsessed with the Broadway Idiot documentary, finding the perfect cup of coffee, and Dallmann’s Sea Salt Caramels.