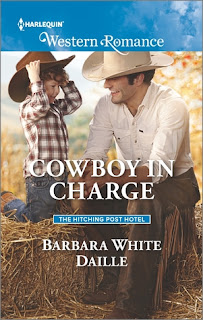 Single mom Layne Slater thought she'd seen the last of Jason McAndry when he chose the rodeo over her and their unborn son. Now Jason's back in Cowboy Creek and just as handsome as ever. But Layne can't give in to those feelings again. She has to protect her children…and her heart.

Jason wants to try to make up for the pain he caused when he left. The least he can do is help Layne while he's home. Before long, Jason realizes he's finally ready to be the husband, father and man his family deserves. But can Jason prove to Layne that this time, their love is forever?

Cowboy in Charge marks my first time reading a book by Barbara White Daille.  I must admit I’m not usually a western/cowboy romance reader although I have read a few.  I love second chance romances and I thought I would give the book a try.

When it comes to Cowboy in Charge, I struggle with trying to find a balance between things I liked and didn’t like.  I thought this was a secret baby story.  You know, where the hero left the heroine to pursue his dream of being a rodeo star and didn’t know that the heroine was pregnant when he left.  That’s not this story at all.  Jason knew Layne was pregnant and still left.  That’s bad on his part, but she kicked him out one too many times.  I don’t feel the story was set up for me to like either of the characters from the beginning.  Though Jason did redeem himself (three years later) the moment Layne opened her door to him.  For me, there wasn’t enough character background for me to actually form a bond with the characters and root for them.  What little background about why Layne was the way she was came in the very last chapter of the book.  Various characters mention that Jason and Layne married young, but the author doesn’t give any details as to how old they are at any point.  I was simply left feeling crucial details were left out.  I also had an issue with the story not being about cowboys or anything cowboy related.  Yes, Jason wore a Stetson.  Yes, Jason drove a truck.  Yes, this took place in New Mexico, which is in the Western part of the country.  Jason worked on a ranch for an estimated total of 5 days in this story.  This doesn’t make this a western/cowboy romance to me.

What I did like about the story was Layne and Jason’s three-year-old son, Scott.  He was adorable and stole the scene whenever he was around.  I also loved Jed “Grandpa” Garland, who apparently is the unofficial matchmaker for Cowboy Creek, New Mexico.  He was so sure Layne and Jason had matured enough, were perfect together, and ready for real forever love. What kept me reading the story was my curiosity as to how this story would end.  While this is a happily-ever-after story, I still don’t like Layne.

I think Barbara had all the elements in this story to make it and the characters likeable, but she just missed the mark.

**Received a copy of the book courtesy of RWA and voluntarily reviewed.**

The Hitching Post Hotel Series:
(Clicking on the book cover will take you to Amazon.)