Review ~ A CRIME OF PASSION FRUIT by Ellie Alexander 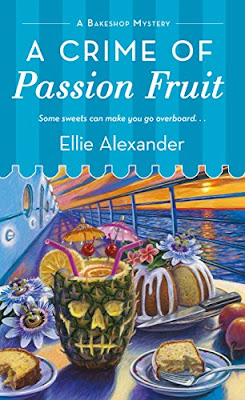 Torte--everybody's favorite small-town family bakeshop--is headed for the high seas, where murder is about to make a splash. . .

Jules Capshaw is trying to keep her cool as Torte gets set to make its transformation from quaint, local confectionary cafe to royal pastry palace. Meanwhile, Jules's estranged husband Carlos is making a desperate plea for her to come aboard his cruise ship and dazzle everyone with her signature sweets. She may be skeptical about returning to her former nautical life with Carlos but Jules can't resist an all-expense-paid trip, either. If only she knew that a dead body would find its way onto the itinerary . .

Now, instead of enjoying tropical drinks on deck between whipping up batches of sea-salted chocolates and flambeing fresh pineapple slices in the kitchen, Jules is plunged into dangerous waters. Her investigation leaves her with more questions than answers: Why can't anyone on board identify the young woman? And how can she help Carlos keep passengers at ease with a killer in their midst? Jules feels like she's ready to jump ship. Can she solve this case without getting in too deep?

Ellie Alexander continues her Bakeshop Mystery series with A Crime of Passion Fruit.  While this is the sixth book in the series, it is a standalone read.  A Crime of Passion Fruit finds Jules Capshaw back on the seas, sailing with her estranged husband Carlos on board the Amour of the Seas.  But this trip is going to be different than any of the trips Jules and Carlos have ever been on.

Immediately, Jules becomes suspicious of a young woman she sees in the crew section of the ship.  Thinking the woman took a wrong turn, she dismisses it.  Later, Jules is horrified to discover the woman’s dead body.  Good thing her mother Helen and the Professor aka Doug Curtis, Detective for Ashland PD has accompanied her on this trip.  When the Professor and the ship’s doctor determine the young woman was murdered, he asks Jules to help him investigate.  Initially, no one claims to know who the woman is or how she got on the ship, but Jules uses her sweet caring charm to get answers.

As if churning out pastries for a ship full of hundreds of people and attempting to solve a murder isn’t enough, Jules finds herself at a crossroad in her life.  It’s been a year since she left Carlos and the sea life she loved after his heartbreaking revelation.  While Jules has rediscovered her love for her hometown of Ashland, Oregon, her friends there, and the bakeshop, she finds that her heart also still belongs to Carlos.  But Jules knows that her two worlds will never fit together.

I loved that Ellie has allowed readers to see the internal conflicts Jules has going on.  I also loved that my own sleuthing skills figured out the killer a few pages before all was revealed to Jules.  Alas, being aboard a ship called Amour of the Seas means romance is definitely in the air, even with murder.  While happiness and love is in the air, something is off with Lance, the Artistic Director of the Oregon Shakespeare Festival, and this situation sets up the next book.  I can’t wait to read Another One Bites the Crust.


Another One Bites the Crust releases on January 3, 2018


Meet the characters of the Bakeshop Mystery Series here.