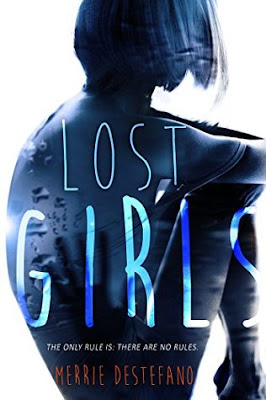 The only rule is: There are no rules.

Yesterday, Rachel went to sleep listening to Taylor Swift, curled up in her grammy’s quilt, worrying about geometry. Today, she woke up in a ditch, bloodied, bruised, and missing a year of her life.

She doesn’t recognize the person she’s become: she’s popular. She wears nothing but black.

Black to cover the blood.

And she can fight.

She’s not the only girl to go missing within the last year…but she’s the only girl to come back. She desperately wants to unravel what happened to her, to try and recover the rest of the Lost Girls.

But the more she discovers, the more her memories return. And as much as her new life scares her, it calls to her. Seductively. The good girl gone bad, sex, drugs, and raves, and something darker…something she still craves—the rush of the fight, the thrill of the win—something she can’t resist, that might still get her killed…

Merrie Destefano’s Lost Girls is a captivating story which keeps you on your toes.  Lost Girls is about a teenage girl named Rachel who ended up in a ditch miles away from her home.  All she can remember is that she was in her room studying for a test a year ago.  Rachel goes through a lot trying to remember the chain of events and find the other “lost girls” who disappeared before her.  Rachel finds out that she was dating her crush Dylan.  We don’t get a lot of romance in the story which would have helped with the dark side of the story giving a small bright side.  The story contains underground fighting that is gruesome and hard to take in.

Merrie has created is a thriller filled shocks.  It brings in sex-trafficking which is a big deal in our society.  Rachel is a hero and an inspiration to girls everywhere.  Merrie ended the story with a perfect bow.  Lost Girls gets a four star rating for having a well structured plot and compelling story that is great for young adults who like thriller and suspense.  Lost Girls shows that one girl can make a difference and change a story page by page.

**Received a copy from the Romantic Times Convention and voluntarily reviewed the book.**