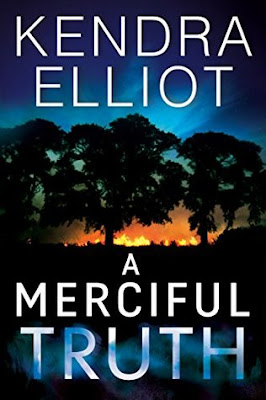 Raised by a family of survivalists, FBI agent Mercy Kilpatrick can take on any challenge—even the hostile reception to her homecoming. But she’s not the only one causing chaos in the rural community of Eagle’s Nest, Oregon. At first believed to be teenage pranks, a series of fires takes a deadly turn with the murder of two sheriff’s deputies. Now, along with Police Chief Truman Daly, Mercy is on the hunt for an arsonist turned killer.

Still shunned by her family and members of the community, Mercy must keep her ear close to the ground to pick up any leads. And it’s not long before she hears rumors of the area’s growing antigovernment militia movement. If the arsonist is among their ranks, Mercy is determined to smoke the culprit out. But when her investigation uncovers a shocking secret, will this hunt for a madman turn into her own trial by fire?

A Merciful Truth is the second book in the Mercy Kilpatrick Series by Kendra Elliot.  I read the first book, A Merciful Death, so I was very familiar with the heroine and her supporting cast.  I would still consider this a standalone because Kendra makes it a point to explain how everyone is connected.  I was really impressed with the first book and was not disappointed with this one.  Although, I will say that there is one part of the storyline regarding Mercy’s estranged family that I feel may be getting a little old.

This time, random arson related fires in and around the small town of Eagle’s Nest, Oregon have escalated into what appears to be the ambush and murder of two Deputy Sheriffs. Eagle’s Nest Police Chief Truman Daly barely escapes with his life and the arson investigation changes direction putting the FBI and FBI Agent Mercy Kilpatrick in the center.  Mercy and Truman just so happen to be dating and their collaboration leads to some intriguing theories regarding who may be behind these recent crimes.  To make matters worse, there is a mystery militia leader that seems to be connected to the people responsible.  And more importantly, Mercy’s brother Owen appears to be supporting the militia.  Without giving too much away, let’s just say that just as in the first book, family drama will play a role in the end. Consequently, that’s the only issue that I have with this series.  I would like to see a plot that doesn’t somehow drag Mercy’s family in.  The town isn’t so small that all roads have to lead back to the Kilpatrick family.

There were a lot of twists and turns which make it difficult to figure out the killer and the motive.  That’s what I like about this series.  Nothing is what it seems and things never end up the way that you think.  Truman and Mercy may have a budding relationship but Mercy’s past makes it difficult for her to totally commit.  This makes everything seem more realistic as you have to question if they will have a happily ever after.  That’s how I like my romantic suspenses to be.  Everything remains up in the air.  I look forward to the next book.


A Merciful Secret, the third book in the series, releases on January 16, 2018