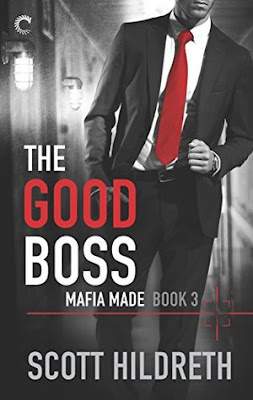 Tripp
I never wanted to rule. But I'm not the kind of man who turns his back when family asks him to step up.

With the ATF breathing down our necks, there is no room for error.

Not when my familia—and my beautiful Terra—is on the line.

Terra
Once I hid who I am—now I must embrace it.

My fiancé now sits at my father's desk. He's the only one who can protect this empire from being exposed and crumbling to the ground.

If Michael is going to succeed, he needs me to be strong. I won't fail him. This is our family and we will fight for it with everything we have.

One-click with confidence. This title is part of the Carina Press Romance Promise: all the romance you're looking for with an HEA/HFN. It's a promise!

The Good Boss is the third book in Scott Hildreth’s Mafia Made Series.  I have read the other two (The Gun Runner and The Game Changer) and can say without a doubt that this is one of the best series that I have read.  It’s told with great detail in first person, alternating between the hero Michael Tripp and the heroine Terra Agrioli.  In order to get the full experience, the books have to be read in succession.  Otherwise, you won’t really understand the depth of all of the relationships.

The Good Boss wraps up the world wind romance between Gun Runner Michael Tripp and Mafia Princess Terra Agrioli.  It starts off with Michael trying to get Terra’s Mob Boss father out of jail based on charges stemming from what happened in the previous book and then proceeds to lower the curtain with a Mafia Fairytale Happy Ending.  There is a great supporting cast that I wish would also get their own books but I’m sure that Scott Hildreth poured so much into these books that it would be hard to top what’s already been done.  The Good Boss was packed with a lot of bravado, love, and was a true homage to family.  Michael did everything possible to protect his new mafia family and Terra had to learn what it meant to truly support the family.  Which was interesting since she grew up in the family while Michael initially wanted nothing to do with any of them.  Over the course of three books, it was truly amazing to see how bonds were formed and roles were reversed.

I can’t stress enough how well written and complexed the characters were.  It was a compelling take on the mafia and I had to admire how they ran their business separate from their families.  Michael was a true hero and he absolutely earned his happily ever after.  I just may have to read other books by Scott Hildreth.

**Received a copy from Carina Press and reviewed the book voluntarily.**

The Mafia Made Series: