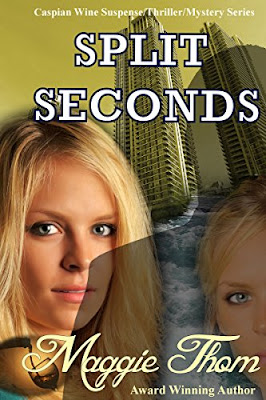 Twins… separated as toddlers, reunited as adults… and now they’re switching places in a dangerous game to take on organized crime.

Her sister is alive! Excited to discover her twin didn't die as a toddler, Tijan can’t wait to meet her other half. But why hasn’t her only sibling reached out in almost thirty years?

Although the reunion is joyous, not everyone is excited to discover there are two of them. Using it to her advantage, Tijan is determined to take down the one man responsible for it all… her father. There are however, others who also want to destroy him and anyone who gets in their path. The secrets and lies that have kept the twins apart, soon unravel but with deadly consequences.

Split Seconds is the third book in Maggie Thom’s Caspian Wine Series and it most definitely has to be read after you read the other two books.  I didn’t read the prior books and I felt as if there were plenty of times that I was missing something.  Mind you, I did enjoy Split Seconds but I felt as if some of the mystery would have been a little less mysterious had I been privy to everyone’s backstory ahead of time.

Split Seconds focuses on twin sisters Tijan and Tarin.  They were separated from each other at the age of two.  When one sets out to find the other 27 years later, they each get more than they bargained for.  One of them grew up rich in the big city while the other grew up on a modest ranch enjoying the outdoors.  It’s a Country Mouse/City Mouse situation. Unfortunately, it appears that their ruthless father has surrounded himself with a lot of shady people.  Consequently, the twins end up facing off against their father for which one of them never knew and other folks looking to gain their father’s wealth and status.  Lives are threatened and deception runs rampant throughout the book.  The challenge with all of the deception was that it was too much.  There were so many twists and turns that it was hard to keep up.  It felt as if Maggie overdid it.  I love a good mystery but there has to be some rationality to it, and things were just too complicated.  I did like the protagonists in the book, however there were just too many moving parts.

If you love a multilayered mystery, Split Seconds would be perfect for you.  It’s not until the very end that all of the puzzle pieces come together.  And when they do, you will be shocked and somewhat appalled by how evil and greedy some people can be.