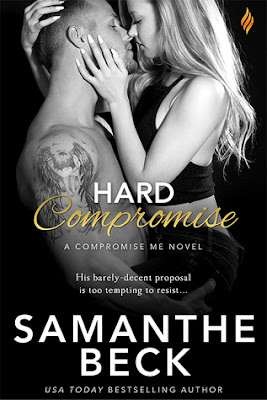 Laurie Peterson assumes her impulsive one-night stand with sinfully sexy Sheriff Ethan Booker is the biggest surprise of the year…until her bakery burns down while she’s basking in the afterglow. It looks like her dreams are up in smoke, but then Ethan proposes a deal too tempting to resist.

Ethan has no intention of settling for a one-night stand with Laurie. Nor does he want anything to do with the women his wealthy family wants him to meet. Not when he’s waited ten years for his chance to make his move. His deal might have strings—and Laurie may not know the stakes—but nothing will stop this sexy cop from staking a real claim on her body and her heart.

In case I haven’t said it before, Samanthe Beck is one of my favorite authors.  It’s like she writes her heroes just for me.  Now, I admit that it has taken me awhile to read Hard Compromise.  My bad.  I don’t know what I was thinking.

The story starts ten years ago on New Year’s Eve at Nido Beach in Montenido, California.  A then sixteen-year-old Lauralie Peterson was caught drinking and partying with a group of frat boys.  Twenty-two-year-old Deputy Ethan Booker was her saving grace.  Lauralie offered to repay Ethan the only way she knew how.  He turned down her advancements with the promised declaration of “Jailbait, we can revisit the topic in ten years.”

Fast forward ten years.  Ethan Booker is now the sheriff.  Lauralie “Laurie” Peterson is now on the straight and narrow.  She hasn’t been in trouble with the police since she was sixteen. In fact, she is the owner of Babycake’s Bakery.  On this New Year’s Eve, Ethan is going to make good on his promise and finally have a shot at the one woman he’s been keeping tabs on for ten years.

I love that Ethan is so sure of himself and how good things can be between him and Laurie. He has this ability to see into her soul and see everything she hides from other people.  I like Laurie’s strength and determination to overcome her upbringing.  Since she was young, she’s had to take care of herself.  Her mother was more concerned about herself and having a good time.  She could care less about having a child.  Unfortunately, not a lot has changed on that front.  Except now, Denise uses Laurie as her personal ATM machine and threatens to destroy everything Laurie has built for herself.

I love Hard Compromise because ultimately that’s what Ethan and Laurie do to be together. They compromise.  Laurie opens herself up to allow herself to depend not only on herself but Ethan and others.  Ethan learns that he has to give up some control.  While he has the ability to help Laurie and save her from her mother and the world, he has to let her fight her own battles. “I’ll always have your back.”

I’m looking forward to the next installment in this series.


You can read an excerpt of Hard Compromise here.


The Compromise Me Series:


When not clinging to sanity by her fingernails or dreaming up fun, fan-your-cheeks sexy ways to get her characters to happily-ever-afters, she searches for the perfect cabernet to pair with Ambien.