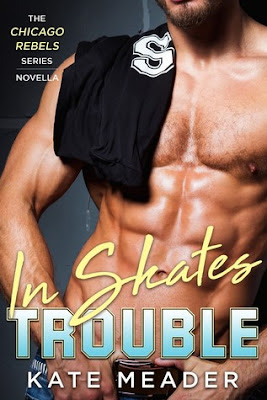 Addison Williams isn't looking for romance, but when she encounters an eavesdropping stranger on an adjoining hotel balcony, she figures she's due a little fun. She just hadn't reckoned on the "fun" escalating so quickly to "out of control." One minute she's flirting with a whiskey-graveled voice in the dark, the next that same voice is telling her to do things. Hot, wicked things.

Cup-winning hockey player Ford "Killer" Callaghan can't believe he let the anonymous woman who blew his mind slip away into the night. He'll track her down because once could never be enough—even if discovering her identity places her strictly out of bounds.

Stolen kisses. Secret hook-ups. Deliciously forbidden in every way. Can a passion that started in the dark find a lifetime of love in the light?

Kate Meader is one of my favorite authors.  She writes with humor and her smexy times are hawt.  I have a tendency to not read the blurbs for her books.  I see her name and I just grab it.  Thus, I wasn’t prepared for what I found inside the pages of In Skates Trouble.

From the first page, a spark is lit.  When Addy and Ford have an anonymous conversation in the dark, the spark becomes a full on inferno.  But Ford isn’t happy with the one-time chance encounter with a woman who really got his blood pumping.  He sets out to find her, only to discover that he wants a relationship with someone who is forbidden and can ruin his successful hockey career.

Addison Williams is a thirty-two year old full-figured lingerie model.  She’s finally getting her life back together after her divorce and isn’t looking for another relationship.  She wants to focus on her career.  Too bad for her, the star hockey player of her former husband’s hockey team has his sights set on her and he doesn’t plan on taking no for answer.

In Skates Trouble is a novella that sets up Kate’s upcoming Chicago Rebels series.  I loved all the characters in this story and can’t wait to find out what happens with Harper Chase in Irresistible You.


You can read an excerpt of In Skates Trouble here.