Review ~ PUDDING UP WITH MURDER by Julia Buckley 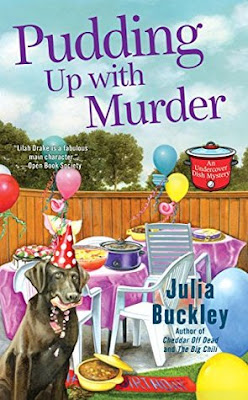 Customers trust Lilah Drake to keep her mouthwatering meals under wraps, but when a millionaire meets his untimely end, some sinister secrets become the main course. . . .
Spring is right around the corner, and with the warmer temperatures come plenty of food requests from Lilah Drake's covered-dish clients. Lilah pulls out all the stops with a sweet new casserole for the birthday party of Marcus Cantwell, a wealthy curmudgeon who has some angry ex-wives and more than a few enemies.
When he's found facedown in Lilah's casserole, it's anyone's guess as to who might have wanted the old man dead. A possible new heir to Marcus’s fortune adds some unexpected spice to the investigation, but Lilah fears that the old adage is true, and "the proof is in the pudding."

Pudding Up with Murder finds Lilah Drake and her friend Ellie Parker, who happens to her boyfriend’s mother, in a familiar situation.  Lilah has a little secret business where she cooks dishes for people and then allows them to pass off the dishes as their own.  This time around, Ellie requests that Lilah make a rice pudding for her neighbor Marcus Cantwell’s birthday party.  After happily reminiscing that the pudding tasted like childhood, Marcus collapses into the dish and later dies.  Lilah and Ellie know they didn’t do anything wrong, and luckily this time around the police are there and know that they aren’t guilty.


In recent years, Marcus became a difficult man to get along with.  He was a wealthy man who seemed to love his dogs more than he loved his three ex-wives, five children, and three grandchildren.  He believed in hard work and wasn’t one to lavish his family with money.  He didn’t seem to have any enemies.  But the question remains, who would have wanted him dead and why?


Julia Buckley has written a wonderful mystery to add to her Undercover Mystery series.  The main characters of Lilah, Ellie, her boyfriend Jay, her brother, and sister-in-law are wonderful.  The secondary characters of Marcus Cantwell’s children and grandchildren are just as great.  The mystery was good with you not being able to take anything for granted. Julia definitely added a few extra breadcrumbs to throw readers off.  There were definitely a few surprises.  I’m happy to say that the romance girl in me is extremely pleased.


I’m hoping this series continues because I just can’t get enough of these characters. Hopefully, a couple of the secondary characters will make more appearances.


**Received a copy from Penguin Berkley and voluntarily reviewed the book.**

Julia Buckley is a Chicago-area writer. Her first mystery, THE DARK BACKWARD, was published in 2006; since then she has published the Madeline Mann mysteries and the first in the Teddy Thurber series on Kindle.


She writes two series for Berkley Prime Crime, with debut titles THE BIG CHILI and A DARK AND STORMY MURDER


Buckley is a member of Sisters in Crime, Mystery Writers of America, and Romance Writers of America, as well as the Chicago Writers Association. She blogs about writing and mysteries at Mysterious Musings, where she has interviewed almost 200 other mystery writers about their work.


She teaches high school English and enjoys reading, playing Words With Friends on Facebook, and spending time with her husband and two sons, along with their menagerie of animals.