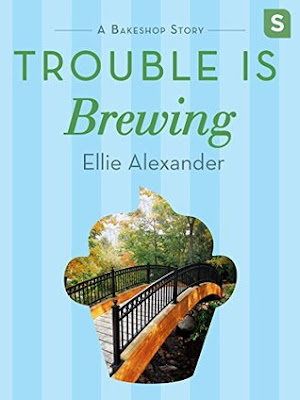 Introducing Sloan Krause—main character of Death on Tap, the first in a new cozy series from Ellie Alexander!

Jules Capshaw, owner of the charming bakeshop Torte, meets Sloan Krause, who's in from out of town for the beer festival that has landed in Ashland, Oregon. Sloan is the brewmaster at the famed der Keller brewing company that operates out of Leavenworth, Washington, and she’s come to the festival to show off the newest spring brew. When Sloan drops in to Torte for a pistachio bar and a latte, she meets Jules, who is instantly smitten with the idea of incorporating beer into some baked goods. But when the two go off to sample some of der Keller’s brews, they realize that one of the kegs have gone missing. Is someone trying to steal the secret recipe? It’s up to Sloan and Jules to get to the bottom of this—and soon.

I love Ellie Alexander’s Bakeshop Mystery series.  In Trouble is Brewing, Ellie takes Jules Capshaw and a few members of Torte to introduce a new character and series.  Sloan Krause is a brewer for her family brewery, Der Keller.  Sloan and her husband Mac are in town for Brew Fest, a beer festival.

As Sloan is preparing to have Jules taste their new beer which has been in the works for three years, they discover that the keg is missing.  They aren’t sure who took it or why, but several potential suspects emerge.

It pains me to say...Trouble is Brewing was a complete let down.  The story actually finished at 35%, with the rest of the book giving you a glimpse of Death on Tap, the first book in the Sloan Krause Mystery series.  The mystery itself was extremely Scooby Doo-ish.  Trouble is Brewing just didn’t live up to what Ellie is capable of giving to readers.  She’s definitely a better plotter and writer than Trouble is Brewing shows.


Another One Bites the Crust releases on January 3, 2018


Meet the characters of the Bakeshop Mystery Series here.