Interview ~ UNDER THE SICILIAN SKY by Alexia Adams 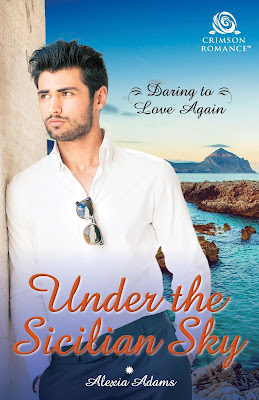 Amnesia obliterates a married couple’s shared past in this poignant second-chance-at-love story.

Matteo Vanni washed up on a Tunisian beach six years ago with no clothes, identity documents, or memories, just a wedding ring to link him to his past. He’s reinvented himself as a wealthy entrepreneur, but now a knock on the head restores some of his memories, particularly that his wife Bella is waiting for him in Sicily. But returning to his native land and digging into his mysterious and sudden disappearance could cost this new millionaire everything.

Sheep farmer Bella Vanni has accepted that her presumed-dead husband is long gone, so it’s a huge shock when he knocks on her door and announces his desire to resume their marriage. She can’t trust his answers on where he’s been or why he left, and she certainly isn’t keen to walk away from the family farm she labored to save. But their mutual passion won’t be denied.

When Matteo’s freedom is threatened, Bella must decide which is most important to her: everything she’s painstakingly built or a new start on love.

Hi Alexia. Welcome to Read Your Writes Book Reviews. How’s life in Canada? Has it started snowing?
Hi Kim, thank you so much for hosting me on your blog today. Life in Canada is good. I live on the west coast, or the wet coast as it’s known locally. We have more rain than snow, although I live midway up a mountain so sometimes we get the white stuff when those in the valley don’t. So far this year we’ve only had a few centimeters (about an inch) and it didn’t last long. I’ve lived in central Canada though, so I’ve had my fill of shoveling and driving through blizzards. Now I’m quite happy for it to stay on the ski hills and off my driveway.

Tell me about your latest book, Under the Sicilian Sky, which is the first book in your Daring to Love series.
The story idea came to me one night when I was watching the Sherlock episode where Holmes comes back from the supposed dead and pretends to be a waiter to trick Watson. I wondered what it would be like for a woman to have her husband disappear without a trace and then one day, years later, show up at her door. Things get even more complicated for my heroine when two other men also declare an interest in her. Who will she choose? Can she accept her husband’s explanation that he’s had amnesia for six years? What about the rumors surrounding his disappearance? Bella must decide if she’s willing to give up everything she’s struggled to achieve to love a husband who’s keeping secrets.

Reading the blurb, the story sounds like a second chance love story, with a little mystery added in. But, I gather that it’s so much more.
It is a second chance at love story at its heart, with the background mystery of Matteo’s disappearance to solve. But it’s also about two people trying to find common ground after so many years apart. Matteo is now an international businessman based in Tunisia. Bella runs a sheep farm and has amassed a menagerie of animals that she can’t bear to leave. She has a camel named Akbar, a donkey, a horse, rabbits, several goats, dogs, and of course the sheep. Midway through the story, the vet’s pet chicken Estella comes for a visit and falls in love with the camel. If you don’t mind, I’d love to share one of my favorite passages with you:

The next time he heard his name slip from her lips she was stomping across the farmyard, her hair tumbled around her shoulders and down her back, her T-shirt hitched up at one side, exposing her taut midriff, and her feet shoved into a pair of old rubber boots. If she were wearing a designer evening gown he couldn’t want her more.

“Did you turn off my alarm and close my curtains?” She came right up to him, her boots toe to toe with his now incredibly disgusting shoes. First thing he was going to buy this afternoon was a pair of farm-friendly footwear.

“Yes.” He couldn’t stop the grin that formed at her outraged gasp. Dio, you’d think he’d eaten her last square of chocolate, spilled her wine, or some equally heinous crime, not given her a few extra hours of precious sleep. “You need more than four hours’ sleep to get done all you do in a day. So I canceled your alarm and did your morning chores for you.”

She glanced at the pails of milk and then around the yard. The camel was fed and watered and put out in the pasture, a chicken atop his hump, both ignoring the newly milked goats that frolicked nearby. The horse and donkey had been brushed and stood staring at the chicken, no doubt, like him, wondering where on earth that had appeared from. The rabbits had new straw, and the dogs were fast asleep in the shade. He’d done good, if he did say so himself, even though milking had taken him almost two hours rather than the forty-five minutes it took Bella.

“The nannies let you milk them?” She reached for a pail, but he moved back, careful not to slosh his hard-earned liquid. “And when did you learn to milk goats?”

“I Googled it. They were reluctant at first”—he’d been butted and tossed on his ass more than once, and he was pretty sure he’d have a massive bruise on his thigh from where one of the goats tried to take a piece of him—“but then I discovered they like to be sung to as I massaged their teats. Your goats have very questionable taste in music. They prefer Italian songs about dirty sex.”

Bella’s eyes widened and a flush crept up her neck. “You sang raunchy songs to my goats as you milked them?”

He hoisted the pails hip level. “Yup, and I got two buckets full. I seem to recall yesterday you got only one and a half.”


That is a very funny scene! Bella has been without her husband for six years. Now, all of a sudden he’s back. But there seems to be two other men vying for her love and affection as well. Tell me about them.
Matteo’s best friend Cristoforo has wanted Bella for years. He’s been waiting patiently for her to get used to the idea that Matteo is gone and be ready to love again. He starts to make his feelings known just before Matteo returns. Bella’s ex-fiancé Kai (the man she left so she could marry Matteo) also shows up. He’s now widowed and wants someone to help him raise his daughter. Having been friends since childhood, he thinks Bella is a prime candidate. Suddenly this woman who has been alone for six years has three men vying for her.

This sounds so complicated. Poor Bella. As you know, I read an excerpt involving Kai Andersen and immediately fell for the guy. He seems like a real character. So, I wonder did any of the characters attempt to take control of the book?
Writing a story with three alpha male characters was a challenge to keep everyone in their place. My editor was even Team Cristoforo at one point. But Matteo was determined to win his wife back, no matter what I threw at him. So I promised the other guys that they’d get their own books and they finally agreed to step aside. Estella the chicken, however, refused to play second fiddle and showed up at one of the most romantic moments as well as played a part in the escape scene.

What was one of your favorite scenes from the book and why?
Oh, hard to pick one as I have so many favorites. Aside from the humorous morning chores scene, there’s a sexy strip poker passage where Matteo discovers that Bella has been sandbagging and letting him win before. I also love the scene where all three men declare their interest in Bella and Kai suggests they drop their pants and she take her pick based on the size of their anatomy. There are also some poignant scenes where Matteo and Bella recall all that they’ve lost and wonder if their lives will ever be compatible again.

But if I had to choose, my favorite would be the scene where Bella explains to Matteo why she no longer wears her wedding ring. Just the thought of never again wearing my rings, the symbol of my happy marriage, has me in near tears.

Those scenes all sound like they could be really fun and extremely important to the overall story. How many books do you plan on having in the Daring to Love series?
At the moment, I have three books planned. Under the Tunisian Sun will be the next to release, it’s Cristo’s adventure in love. Then Kai will get his turn. Of course you never know when supporting characters in those stories will demand their second chance at love as well so perhaps there will be more.

Alexia, thank you for taking the time to answer some questions for me.
Thank you so much, Kim. I hope your readers enjoy reading Under the Sicilian Sky as much as I enjoyed writing it.

A former world wanderer, Alexia Adams writes contemporary romance stories that reflect her love of exotic destinations and diverse characters and cultures. She currently lives near Vancouver, Canada with her husband and four children and dreams of a world without housework. As a flight risk mom, romance is her escape and she can often be found with her nose in a book, pretending she’s somewhere else.
Places to find Alexia:
Website | Facebook | Twitter | Goodreads | Newsletter | Pinterest | Amazon Author Page