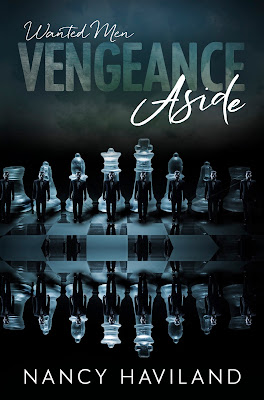 Revisit Nancy Haviland’s bestselling mafia series with this prequel novel featuring a Russian mobster who is forced to put vengeance aside in order to please the Pakhan he calls father.

He sees her. He falls. He proves it by killing for her in a room full of his associates.

Now he’ll take her home and try to convince her a love that descends like a hammer is one that can last a lifetime.

She sees him. She stumbles. She proves her sophistication by fainting, then comes to in a Russian mobster’s compound.

Now she’ll protect herself while experiencing all the things she’s been denied her entire life.

**This novel is a prequel to A Love of Vengeance (Wanted Men #1) but can be read as a standalone.**

Vengeance Aside is a prequel to Nancy Haviland’s Wanted Men Series. I have read every book in the series and am a huge fan. I have very mixed feelings about this one. On the one hand, I can always appreciate a brooding and lethal mobster. On the other hand, I like my books to have some realistic elements regardless of the fact that it is fiction. There is just so much in this book that is unrealistic that I struggled with even finishing it. That’s significant because I have been waiting a long time for the next book in this series which would have featured different characters.

Vengeance Aside is about Lukas Zavrazin who is the advisor to his Russian Mobster father Kostya Zavrazin and their bratva in Houston, Texas. Lukas and his younger brother Samuel grew up in the mob life but their parents were loving people and are nothing like one would expect. A near fatal gunshot to Kostya forces him to pressure Lukas to get married and have children. The request comes as a sort of a dying wish so Lukas is desperate to make the wish come true. Samuel comes up with the idea of introducing Lukas to a young lady that works at the nightclub that Samuel owns and Lukas is a silent partner. Her name is Magdalena “Dale” Vaner. Dale doesn’t do relationships because of her very loveless and tragic childhood. She just wants to have a baby so she has something that could never leave her. When Lukas lays eyes on Dale, it’s love at first sight but Dale will not acknowledge it. It doesn’t help that Lukas is already talking marriage and babies within hours of their meeting. Plus, Lukas even kills someone in front of Dale to protect her honor. She freaks out but not enough to run away. That’s just the tip of the iceberg. Without giving too much away, Dale sees all of these warning signs but ignores them all and moves forward with their relationship.

I’m all for a good happily ever after but this one was inconceivable from start to finish. I did enjoy the action in and out of the sheets. I could also appreciate the message that the author was trying to convey. I just didn’t believe any of it. I sure hope that the next book gets back on track.

He watched as she licked her lips to kill time because the comment threw her. She recovered quickly enough despite the confusion she felt when she became aware of their heartbeats merging into a weird, rhythmic beat.

“You will, later, because you’re coming home with me when I’m finished here, and I plan on making you very thankful.”

Her already erratic pulse went nuts. “Just like that?” Had assumption ever been so delectable? So tempting.

She. Melted. “I take it this means I’m forgiven?”

He made a rough sound in his throat. “For every sin you have ever committed.”

Her panties disintegrated right along with her moral compass, which was why she did nothing when his dark head descended. Their lips met, his tongue plunged, and what a mistake it was not to resist because the remarkable taste of him instantly became an addiction, branding her and ruining her for any other.

The frantic warning going off in the back of her mind was ignored as her hands found their way up to tangle in his hair. He groaned and pulled her in tighter as he deepened the kiss, feeding from her, feeding into her, something she somehow recognized was life.

A throat was cleared. “Hey, you two. Looks like you didn’t need a meet-and-greet after all.”

The voice buzzed in her head, sounding like it was coming from the end of the hallway. Lukas spun her so his back was to the door and she was hidden from sight. His hand stayed pressed to her tailbone as the other gripped her nape. He held her in place as he lifted his head. They were both breathing heavily, and his eyes were blazing with an expression she’d never seen aimed her way before. His mouth, that firm, beautiful mouth, was moving.

She missed what came out of it because she was being inundated with sensations, all of them wonderous and so fucking sexual she didn’t want a distraction for the first time in her existence. But he was waiting for a response.

“Sorry. Would you repeat that?” Her ears were ringing.

“What is your name?”

Aaaand embarrassment hit her with the force of a speeding bus.

“Dale? Do you not know my brother?”

She jumped like someone had touched a flaming branding iron to her bare ass. Didn’t want to, but she leaned to the side to look around Lukas’s shoulder. Vasily, the man she’d met downstairs, moved into the room and was looking at his phone. Sergei followed him, looking hollow-eyed and slightly disgusted while Maksim and Samuel stood in front of the door, smirking their asses off.

“I do now,” she said as she extracted herself from her fucking boss’s husband’s brother’s arms! Lukas seemed to have frozen and wasn’t helping, but she persevered. “And that’s how you French kiss, Lukas,” she dared say before smoothing his tie down with a pat to his chest that begged forgiveness. She walked with her head held high to the bar that ran alongside the wall to the left of the door.

“Your brother was asking for pointers,” she informed Samuel without looking at him, “because

he has a big date, and he sweetly admitted he’d do almost anything not to disappoint thevery lucky lady looking so forward to seeing much more of him later tonight.”

She made sure her lips were curved at the right angle to mimic a smile and grabbed a couple of bottles that had already been opened—Stoli Elit and Tesseron.

“You know what it’s like,” she continued when no one said anything. “Didn’t you want to leave Farah with the best impression after your first kiss?” Her runaway tongue was either going to get her fired or killed.


Purchase Vengeance Aside from: 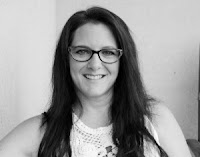 You can follow the Vengeance Aside Blog Tour here.

a Rafflecopter giveaway
Follow
Posted by Kim at 12:09 PM