Review ~ SCORING WITH THE WRONG TWIN by Naima Simone 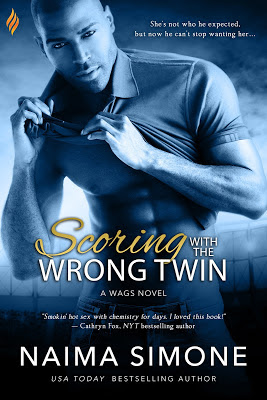 She’s not who he expected, but now he can’t stop wanting her...

Shy, awkward Sophia Cruz has a hard time telling her vivacious identical twin “no.” But when her sister begs her to swap places for a modeling shoot, she caves … again. Then Zephirin Black walks onto the set. The brooding, aloof, and gorgeous tight end for the Washington Warriors. But she can keep it professional… She has to. Because the adorkable Cruz twin has no luck with guys once they compare her to her sister.

After a bad break-up, Zeph hasn’t been big on second chances—and even less with trust. But he finds himself giving please-call-me-by-my-middle-name-Sophia both. The woman he’d dismissed as a spoiled cover model is different from the first time he met her. Quirkier. Funnier. Definitely sexier. What started as one night turns into another…and another…and another…

Still, Sophia can’t go on keeping her secret from him. But telling Zeph the truth will mean losing him for good.

When I picked up Scoring with the Wrong Twin by Naima Simone, I had no idea what to expect. I’m a huge fan of her Indulgence books, but this marks her first time writing under the Entangled Brazen imprint. What I got was Naima’s standard snarky, sassy heroine and devastatingly sexy, multi-layered hero. The sexy times were kicked up and hot enough to melt steel. I LOVED every page!

The story starts off with model Giovanna Cruz begging her identical twin Sophia to take her place at a photoshoot. Giovanna has just double booked herself to walk the runway in Milan the same time she is supposed to do a cover shoot for a sports magazine with Washington Warriors Tight End Zephirin Black. Sophia is everything her up and coming supermodel sister isn’t. She’s an app program designer who is more comfortable with no make-up on, relaxed jeans, t-shirts, and flip flops. She isn’t necessarily shy, but she doesn’t like the spotlight. She has an understated beauty and incredible personality that she doesn't seem to know she has. Reluctantly, Sophia agrees; not knowing what Zephirin looks like or that he has met and worked with Giovanna before.

I loved the moment Sophia first lays eyes on Zephirin. This scene was so detailed that it’s like you were actually there. Naima has a way with words that’s simply intoxicating. From start to finish, I was captivated with Scoring With the Wrong Twin. As I kept reading the story, the words “abort, abort, abort” kept echoing in my head. I was so sure how the true identity of Sophia was going to be revealed. To my surprise, it didn’t happen the way I thought it would at all.

Sophia and Zephirin were characters who were likeable from the very beginning. In fact, Sophia is the best friend I would love to have. When these two are together, they’re fun, playful, and passionate. I loved the secondary characters of Giovanna, Dom (Quarterback for the Warriors) and Ronin (Wide Receiver for the Warriors).

Naima a has set a very high benchmark for this series. I can’t wait to get my hands on the next book.

**Received a copy from Entangled Publishing and voluntarily reviewed. I also personally purchased a paperback copy.**

You can read an excerpt of Scoring With the Wrong Twin here.