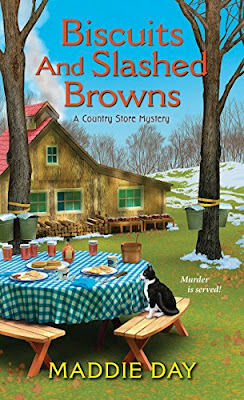 For country-store owner Robbie Jordan, the National Maple Syrup Festival is a sweet escape from late-winter in South Lick, Indiana--until murder saps the life out of the celebration . . .

As Robbie arranges a breakfast-themed cook-off at Pans 'N Pancakes, visitors pour into Brown County for the annual maple extravaganza. Unfortunately, that includes Professor Connolly, a know-it-all academic from Boston who makes enemies everywhere he goes--and this time, bad manners prove deadly. Soon after clashing with several scientists at a maple tree panel, the professor is found dead outside a sugar shack, stabbed to death by a local restaurateur's knife. When an innocent woman gets dragged into the investigation and a biologist mysteriously disappears, Robbie drops her winning maple biscuits to search for answers. But can she help police crack the case before another victim is caught in a sticky situation with a killer?

In the Country Store Mysteries, Robbie Jordan is the owner and chef of Pans ‘N Pancakes, her country store. She has a lot on her plate (as does her author, oddly enough!). She manages two employees. She does the ordering, banking, and books for her store and restaurant. She’s renovating her second floor into bed-and-breakfast rooms. She likes riding her bike and doing difficult puzzles in her spare time, and she also has a pretty darn cool new boyfriend, Abe O’Neill. Oh, and she finds time to follow up clues and ferret out the facts when a murder crosses her path.

So how in the world does she manage? For one thing, she makes time for exercise. Robbie knows (as does her author!) that foraying out into the fresh air and raising her heartrate does wonders for maintaining sanity. For another, she has a darling tuxedo cat who really likes to play and to keep her company in the store after hours when she’s doing breakfast prep. You can’t get too stressed out when you’re playing with a kittycat. Robbie also likes to get the graph paper out and set up the current case as a crossword puzzle, since that’s the way her brain works.

Danna and Turner are younger than Robbie. Both are reliable competent cooks, and are willing to wait and bus tables and scrub pots. When Robbie needs to rely on them, she knows she can. Robbie also has a circle of stalwart friends – and her Aunt Adele – who pitch in to help when she needs them. And then there’s Abe, who cares very much for Robbie – and the feeling’s mutual. He’s a way more decent guy than the last one in her life and is way better than her ex-husband. She’s gradually getting over a few trust issues, learning she can rely on Abe.

Sure, Robbie faces her own set of challenges, but I’ve enjoyed getting to know her over these past four books, and I hope you have, too. Death Over Easy comes out next July and Strangled Eggs and Ham sometime in 2019, and we’re expecting many more beyond then, too.

You can read my review of Biscuits and Slashed Browns here. 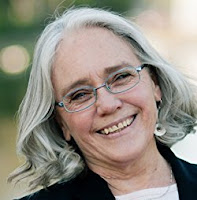 Edith Maxwell is a 2017 Macavity and Agatha Award nominee and has also had several short stories nominated for an Agatha. She writes the historical Quaker Midwife Mysteries and the Local Foods Mysteries. Under the pseudonym Maddie Day she writes the Country Store Mysteries and the Cozy Capers Book Group Mysteries. Her award-winning short crime fiction has appeared in many juried anthologies. She is honored to serve as President of Sisters in Crime New England and as co-chair of the New England Crime Bake in 2018 and 2019.

A fourth-generation Californian and former tech writer, farmer, and doula, Maxwell now writes, cooks, gardens, and wastes time as a Facebook addict north of Boston with her beau and two cats. She blogs at WickedCozyAuthors.com, Killer Characters, and with the Midnight Ink authors.

You can follow the Biscuits and Slashed Browns Blog Tour here.

a Rafflecopter giveaway
Follow
Posted by Kim at 4:05 AM