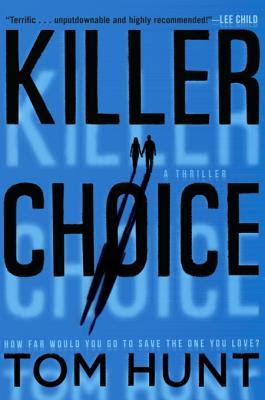 The electrifying debut thriller that asks the question: To save the one you love, is there any price you wouldn’t pay?

His wife is sick.
He needs $200,000 to save her.
A mysterious man offers to give him the money with just one catch: He has to murder someone to get it.

Gary Foster’s life is finally heading in the right direction. After years of trying, his wife, Beth, is pregnant, and he recently opened a business with his brother. But one phone call changes everything....

After collapsing suddenly, Beth has been rushed to the hospital. Tests reveal a devastating diagnosis: an inoperable brain tumor. Their only hope is an expensive experimental treatment available abroad, with a cost that’s out of their reach. And Beth’s time is running out....

Then a strange man approaches Gary and offers the money he needs, on one condition: that he kill someone, no questions asked. End one life to save another.

In this nail-biting debut novel of domestic suspense, one man makes a choice that forces him to confront the darkest reaches of his soul and betray those closest to him. As he’s swept up in a nightmare of escalating violence, he must question his own morality—and determine just how far he’s willing to go to save the woman he loves.

How do I describe Killer Choice, a book that’s both good and bad at the same time? The writing was good. Everything that happens was bad. I would call this an afterschool special. Or better yet a fable. It’s one of those situations where at the end someone would say to you, “What’s the moral of the story?” And that moral would be not to try and change destiny no matter how much you want to. If you are faced with insurmountable odds, just hope that things will work out on their own because choices have consequences. And some of those consequences can be really, really bad.

I don’t want to give it all away so I’ll try to sum it up. Gary and his wife Beth have been together for twenty years. They are expecting their first child. Beth collapses and soon finds out that she has an inoperable brain tumor that will likely kill her in the not so distant future. There is an experimental trial in Germany that would cost $200,000 that they don’t have. Gary and Beth set up a GO FUND ME type of website to raise money. They do a video and news spot to get the word out but that just doesn’t seem like it will be enough. And then Gary gets approached with an offer that he should refuse. He can make $200,000. All he has to do is murder a cop. And he does. Everything else that happens after that is a lesson in bad choices for everyone involved. There is no happy ending. Gary and his family’s life will never be the same.

I so hoped that there would be a point in Killer Choice where the good guy lives happily ever after. That’s not exactly what happens. In essence, tragedy happens. I just won’t tell you for whom the bell tolls. It was depressing and I understand why everything happened the way that it did. There’s a message. You have to read it to get it. It’s painful but realistic.