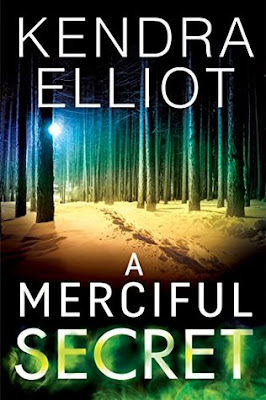 A pair of ritual murders could expose Mercy Kilpatrick to something terrifying: her own past…

Raised off the grid by survivalists, Mercy Kilpatrick believed in no greater safeguard than the backwoods of Oregon. Unforgiven by her father for abandoning the fold for the FBI, Mercy still holds to her past convictions. They’re in her blood. They’re her secrets—as guarded as her private survival retreat hidden away in the foothills.

In a cabin near her hideaway, Mercy encounters a young girl whose grandmother is dying from multiple knife wounds. Hundreds of miles away, a body is discovered slashed to death in a similar way. The victims—a city judge and an old woman living in the woods—couldn’t be more different. With the help of police chief Truman Daly, Mercy must find the killer before the body count rises. Mercy knows that the past has an edge on her. So does her family. How can she keep her secrets now…when they’re the only things that can save her?

A Merciful Secret is the third book in the Mercy Kilpatrick series. Just like the other two, the suspense kept me on the edge of my seat until the bitter end. Kendra Elliot continues to write stories that draw you deep into the minds of the characters and really want to know why things are happening. Although I figured out who the killer was early on, I doubted myself until it got close to the end. There was a lot of information that made me think I could be wrong. The twists and turns kept coming.

The series focuses on FBI Agent Mercy Kilpatrick and her growing relationship with Eagle’s Nest Police Chief Truman Daly. And of course, there’s always a mystery to be solved when Mercy is involved. This time, she stumbles upon a little girl looking for help on the road in the middle of the night. The little girl leads her to a cabin in the woods where an older lady, the little girl’s grandmother has been stabbed multiple times. The woman eventually dies in front of Mercy. Consequently, Mercy makes it a point to figure out who the murderer was although it isn’t technically her investigation. The investigation takes on a life of it’s on as it seems to be connected to the murder of a high-profile judge. From there, the body count begins to rise but the suspect list doesn’t. The little girl’s mother seems to be in the middle of everything but the FBI is having trouble finding her. Oddly enough, trouble also seems to find the mother too. That’s about all that I can say without giving too much away.

A Merciful Secret was another well crafted mystery. The characters were well developed and I appreciated the fact that this was not a typical mystery. You get to see relationships develop during the course of the investigation which make you more invested in the main characters. Yet, there is still a lot about them that I would like to know. A Merciful Secret was very realistic and felt like it could really happen. I hope that there are more Mercy Kilpatrick novels to come.


A Merciful Silence, the fourth book in the series, releases on June 19, 2018