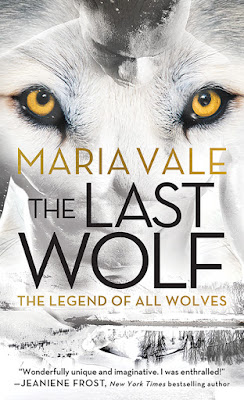 For three days out of thirty, when the moon is full and her law is iron, the Great North Pack must be wild.

If she returns to her Pack, the stranger will die.

But if she stays…

Silver Nilsdottir is at the bottom of her Pack’s social order, with little chance for a decent mate and a better life. Until the day a stranger stumbles into their territory, wounded and beaten, and Silver decides to risk everything on Tiberius Leveraux. But Tiberius isn’t all he seems, and in the fragile balance of the Pack and wild, he may tip the destiny of all wolves…

The Last Wolf is the first book in a new series by Maria Vale. Maria is a debut author and I am definitely a fan. She has designed a fresh and intricate new world surrounding the lore of werewolves and shapeshifters. It’s a great spin on these ancient creatures that have been depicted in so many ways throughout history. The story starts off in the 1600s and comes into 2018 where we see how the modern world affects how mystical creatures have altered their survival tactics.

At the core of The Last Wolf, it’s an unlikely lovely story involving a werewolf named Silver and a shifter named Tiberius. However, there is a lot more to it than that. The book also focuses on tradition, trust, and betrayal as well as the concept of nature versus nurture. Silver grew up in the pack and fully accepts their traditions. She is not comfortable being in human form and has no clue how to maneuver in the human world. On the other hand, Tiberius is the exact opposite. He feels out of place when he comes to live with the pack for sanctuary and he is very much a human. It’s a simple case of how Tiberius was raised to shun the part of him that’s a werewolf because he is half-shifter/half-werewolf. Silver is the runt of her pack and is destined to always be at the bottom of the hierarchy although her lineage is that of werewolf royalty. Together, Silver and Tiberius embark on a journey of love and acceptance not only of each other but of all parts of their heritage. They truly complement each other.

There is nothing about The Last Wolf that’s predictable or cliche. I was pleasantly surprised by all of the new concepts that the author introduced in this often told tale of the supernatural. I can’t say enough about how impressed I was with the writing and imagination that went into this book. I can’t wait for the next book.

You can read an excerpt of The Last Wolf here.

A Wolf Apart, book two in the series releases August 7, 2018