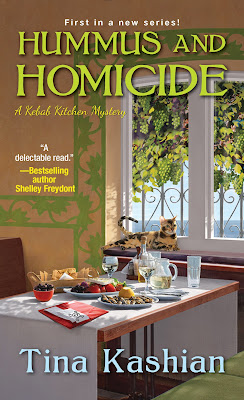 When Lucy Berberian quits her Philadelphia law firm and heads home to Ocean Crest, she knows what she’s getting—the scent of funnel cake, the sight of the wooden roller coaster, and the tastes of her family’s Mediterranean restaurant. But murder wasn’t on the menu . . .

Things are slow in the off-season in this Jersey Shore town, but Lucy doesn’t mind. She doesn’t even mind waitressing at the Kebab Kitchen. Her parents have put in a new hummus bar, with every flavor from lemon to roasted red pepper. It’s fun to see their calico cat again, and to catch up with her old BFF, who’s married to a cop now.

She could do without Heather Banks, though. The Gucci-toting ex-cheerleader is still as nasty as she was back in high school . . . and unfortunately, she’s just taken over as the local health inspector. Just minutes after eating at the Kebab Kitchen—where she’s tallied up a whole list of bogus violations—she falls down dead in the street. Word on the grapevine is it’s homicide, and Lucy’s the number one suspect . . .

Thank you for having me as a guest! I’m excited to introduce readers to the characters of “Hummus and Homicide,” the first book in my Kebab Kitchen Mystery series set at the Jersey shore.

Lucy Berberian - A recovering Philadelphia lawyer. After her job threw her a curveball, she’s returned home to her family’s Mediterranean restaurant, Kebab Kitchen at the Jersey shore. She’s avoided home for a while, mostly due to a match making mama and an ex that broke her heart. Her mother is still after Lucy to produce the next grandchild, and the ex…well, he’s even better looking than before and working as a chef at the Kebab Kitchen. But Lucy has missed Ocean Crest, a quaint town at the Jersey shore, and she fondly recalls the scent of funnel cake, the sight of the wooden roller coaster on the boardwalk, and the tastes of her family’s restaurant.

Katie Watson - Lucy’s best friend since grade school. Tall, blonde, and thin, she is Lucy’s opposite in every way. The pair also came from different worlds. Lucy is a first generation American, and Katie often jokes that her ancestors sailed on the Mayflower. Katie was raised on meat and potatoes, and apple pie while Lucy grew up eating stuffed grape leaves and hummus. None of their differences matter. Lucy and Katie are besties and both value their friendship. Lucy is staying with Katie and her husband, Bill, an Ocean Crest police officer.

Angela Berberian - Lucy’s mom and the head chef of Kebab Kitchen. She may be short, only five feet tall even with her beehive hairdo, but she’s a talented chef and smart businesswoman. She’s also been nagging Lucy to get married. Angela may mean well, but her expectations and smothering can be as thick as the sugar syrup on her baklava—sticky, sweet, and effective as super glue.

Raffi Berberian - Lucy’s dad and co-owner of Kebab Kitchen with his wife. After thirty years as a restaurateur, he wants to sell Kebab Kitchen and retire wife, Angela. He can be stubborn, but is very loyal to family and adores his daughters, Lucy and Emma.

Azad Zakarian - Lucy’s ex-boyfriend who broke her heart after college. Since then, he attended culinary school and hopes to purchase Kebab Kitchen from Lucy’s parents when they retire. Tall, dark-haired and handsome, he’s even better looking than Lucy has remembered. Despite her best efforts, sparks still fly between them. It doesn’t help that Azad is trying to win her back.

Emma Berberian - Lucy’s sister. She’s a waitress at Kebab Kitchen and is married to Max and has a ten-year-old daughter. She wasn’t always a good girl, and her past comes back to haunt Lucy and her family when it comes to the town’s sole detective, Calvin Clemmons.

Bill Watson - Katie’s husband, an Ocean Crest police officer. His wife, Katie, is obsessed with watching crime shows on television, and peppers him with questions about his work. He tells Lucy and Katie to stay out of police business, but he also knows the pair tend to find trouble.

Michael Citteroni - a hot, bad-boy motorcycle rider. Michael runs a bicycle rental shop next door to Kebab Kitchen. He entices Lucy to take a ride on his Harley-Davidson, and charms her. After a stint as dry as the Sahara, Lucy now has two good-looking men interested in her.

Anthony Citteroni - Michael’s father and the owner of numerous businesses in Ocean Crest. Rumors say he has mob connections in the neighboring town of Atlantic City, and his many businesses are how he launders money. Lucy is wary around him and for good reason.

Now that you are a familiar with the characters a bit, I hope you’ll like the series. “Hummus and Homicide” is the first book in the series, followed by “Stabbed in the Baklava” (9/18), and “One Feta in the Grave” (2/19).

Stabbed in the Baklava releases on August 28, 2018

Tina Kashian spent her childhood summers at the New Jersey shore, building sand castles, boogie boarding, and riding the boardwalk Ferris wheel. She also grew up in the restaurant business where her Armenian parents owned a restaurant for thirty years. She worked almost every job—rolling silverware and wiping down tables as a tween, to hosting and waitressing as a teenager.

After college, Tina worked as a NJ Deputy Attorney General, a patent attorney, and a mechanical engineer. Her law cases inspired an inquiring mind of crime, and since then, Tina has been hooked on mysteries. The Kebab Kitchen Cozy Mystery series launches with Hummus and Homicide, followed by Stabbed in the Baklava and One Feta in the Grave by Kensington Books. Tina still lives in New Jersey with her supportive husband and two young daughters. Please visit www.tinakashian.com and join her Newsletter to enter free contests to win books, get delicious recipes, and to learn when her books will be released.

You can follow the Hummus and Homicide Blog Tour here.