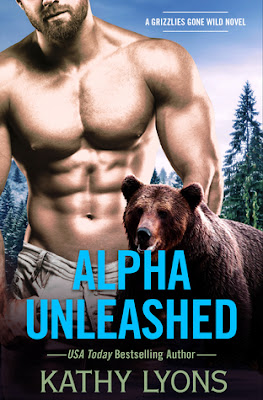 Some men aren't meant to be tamed. Especially if they're Grizzlies Gone Wild.

YOU CAN'T KEEP A GOOD BEAR DOWN

Alyssa Nelson doesn't actually believe that Simon Gold is a shape-shifting grizzly bear---until she sees it firsthand. Aaaaand the award for Totally Surprising Changes goes to Simon Gold. But Alyssa doesn't have time to deal with the fact that her ruggedly hot, long-time secret crush is a shifter . . . not when her brother has turned into one, too.

After ten months in bear form, Simon is struggling. He's not ready to deal with anyone, let alone the bold and gorgeous Alyssa. Mine, whispers his bear. But all hell has broken loose in the Detroit shifter community, and it's spreading to humans. Now Simon must face the darkest place of all: where bear and man become one. And the only way he can make it back to his humanity is by finding---and claiming---his mate.

Alpha Unleashed is the fourth book in Kathy Lyon’s Grizzlies Gone Wild Series. In fact, this is a standalone read and seems to kickoff a new direction for the series.

Simon Gold joined the military to gain the discipline he felt he was missing. He’s a strategic thinker and a good fighter. The military gave him a purpose. So when he left the Army, he became a lost man. Seeking a break from all the changes going on in his life, he shifted into his grizzly bear form and roamed the wilderness of Gladwin State Park. The bear became happy being free and Simon ended up being a bear for ten months, which is completely unheard of. This changes when Alyssa Nelson shows up and shoots Simon, thinking he’s a bear attacking her.

Alyssa is desperate to get help for her brother Vic, who is Simon’s best friend from the Army. People in Detroit are getting sick and dying. Some are even becoming disfigured and turning into monsters. The CDC has dubbed the illness the Detroit Flu. Simon swears he can’t help, but Alyssa insists that he is Vic’s only hope. Alyssa’s appearance and insistence that Simon accompany her back to Detroit puts Simon on a collision course with his destiny.

While seeking answers to what is causing the strange outbreak, Simon accidentally ascends to the position of Alpha of the Detroit Griz. He immediately starts making changes. Certain people in the pack don’t feel change is warranted, thus making Simon and Alyssa targets. Lines are drawn. Alliances are decided. Heroes will rise. But one thing is for certain, Simon, Alyssa, and Vic will never be the same again.

Kathy immediately draws you into the story, with Simon’s bear having a true bear moment. She transitions into showing the playful banter between Simon and Alyssa after Alyssa shoots him. With an intriguing storyline and scenes you can visualize, Kathy keeps you glued to the pages.

Alpha Unleashed is a complete story, with a HFN for Simon and Alyssa. However, the story arc will continue to be played out in the next book as the Detroit Flu promises to continue to spread.

**Received a copy from Forever Yours and voluntarily reviewed the book.**

Bound to the Bear releases September 4, 2018

Kathy Lyons is the wild, adventurous half of USA TODAY bestselling author Jade Lee. A lover of all things fantastical, Kathy spent much of her childhood in Narnia, Middle Earth, Amber, and Earthsea, just to name a few. There is nothing she adores more than turning an ordinary day into something magical, which is what happens all the time in her books. Winner of several industry awards including the Prism-Best of the Best, Romantic Times Reviewer's Choice, and Fresh Fiction's Steamiest Read, Kathy has published over fifty romance novels, and she's just getting started. Check out her latest news at KathyLyons.com.