Interview, Excerpt & Giveaway ~ TO CATCH A THIEF by Nan Dixon 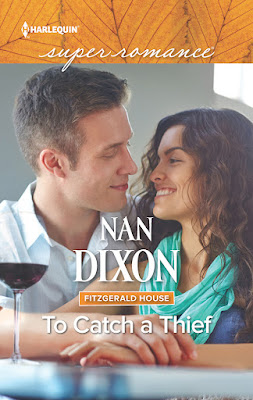 What would you do for your family?

When Carolina Castillo’s once vivacious mother becomes ill, she gives up her singing dreams and comes home to Savannah. She’d do anything for her Mamá, even work at Fitzgerald House for the family she should have been part of. She’d even steal.

Carolina’s decisions make perfect sense until she comes up against the immovable rock that is gorgeous FBI agent Sage Cornell. The honorable cop sees the world in black-and-white. He would never understand the difficult choices she’s had to make, the secrets she’s been forced to keep close. And he could never love a woman like her. Or could he?

Hi Nan. Welcome to Read Your Writes Book Reviews. How are you?
I’m wonderful! Spring is finally arriving in Minnesota melting the piles of snow. Thank you for having me here. I really appreciate it.

There are currently six books in your Fitzgerald House series. What can you tell me about the series and are the books standalones?
Fitzgerald House is a B and B set in the historic district of quirky, lush Savannah. The three Fitzgerald sisters are turning their old family mansion into a successful business and while they do, they tumble into love. In opening their doors, arms and hearts they gather new friends and expand their family. Each story is a standalone, but what I see from some reviews is when people discover me through one book, they go back to the beginning and read them all. I’ve even seen people reading them twice which brings tears to my eyes.

To Catch a Thief is the sixth book in the series. What can you tell me about it and its couple?
In TO CATCH A THIEF, I explore the theme of needing to choose between love and honor. Carolina, a lonely, illegitimate singer will do anything to comfort her terminally ill mother, even steal. But stealing is the last straw for Sage, the honor-seeking FBI agent she loves.

There are a number of layers to this dilemma. First, Carolina’s mother has cancer and it has metastasized in her brain. Her filters have disappeared. She asks Carolina to steal things from Fitzgerald House, the B&B. When Carolina hesitates, her mother is so stressed she begins having seizures.

Then there is Carolina’s secret and Sage’s reaction to her concealment and the subsequent exposure. (I won’t say what’s exposed. You’ll need to read the book. 😀)

Finally, when Sage discovers Carolina has stolen from Fitzgerald House he must choose between his love for her and his need to be honorable. Sage believes Carolina’s explanations are just excuses.

But love is powerful. All love. Community love. Family love. And romantic love.

Sage filters everything in his life through measuring what would his honorable father do. He is a white knight, even though he’s recovering from an injury. But he is too black and white. He needs to learn that there is honor in all people. And actions that may look dishonorable, are really done from love.

Tough question...If you could spend one day with one of your characters who would it be and what would you guys do?
I would spend it with Sage at his family ranch in Texas. I think I would let him teach me how to ride!

He boosted his butt onto the stool, moaning like he was Gramps after being in the saddle for a day.

Two women worked behind the counter drawing beers. He closed his eyes and took a couple of deep breaths.

The napkin slipped out of her fingers and floated to the floor.

“You got the job.” Did that make him feel better or worse since she hadn’t called?

“First day.” Her deep blue eyes had that stunned look, like a white-tailed deer caught in a four-wheeler’s lights at dusk.

“How’s your mother?” He schooled his voice, hoping she couldn’t catch his disappointment.

Her shoulders moved up and down with her sigh. His eyes dropped to her chest. Even in the modest polo, he didn’t need much imagination to remember how she’d pressed against him as they’d kissed.

So why in blazes hadn’t she called?

“They can’t get her seizures under control.” Her fingers crushed the second napkin she pulled for him. “She’s still in the hospital.”

“Thanks.” She stared into his eyes.

The noise of the room slipped away. He wanted to make the pain in her deep blue eyes disappear, too.

“I’ll have their seasonal.” He could have one beer and make it last through dinner.

“I’ll get that.” But she stayed right in front of him.

He smiled. Maybe she hadn’t been blowing him off. Warmth flooded through him.

Cripes. He let go and the warmth faded like a leaking balloon. He was an idiot. “Sorry.”

Over her shoulder, she quipped, “I didn’t mind.”

“Like I said, I’m available for dinner or just a shoulder to cry on.” Preferably in bed, but even he wasn’t crass enough to suggest that to her. He wanted to help any way he could. It was the Cornell way.

Award winning author Nan Dixon spent her formative years as an actress, singer, dancer and competitive golfer. But the need to eat had her studying accounting in college. Unfortunately, being a successful financial executive didn’t feed her passion to perform. When the pharmaceutical company she worked for was purchased, Nan got the chance of a lifetime—the opportunity to pursue a writing career. She’s a five-time Golden Heart® finalist, lives in the Midwest and is active in her local RWA chapter and on the board of a dance company. She has five children, three sons-in-law, two granddaughters, one grandson and one neurotic cat.

You can follow the To Catch a Thief Blog Tour here.