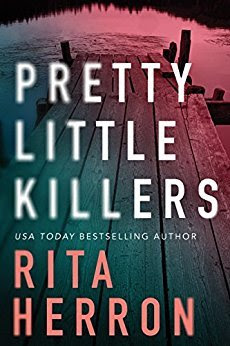 The predators become prey in a breathless novel of revenge from a USA Today bestselling author.

Still haunted by his wife’s murder—and stained by the blood of avenging it—FBI special agent Hatcher McGee can’t believe he’s being teamed up with rookie agent Korine Davenport. She is his most guilty secret—the one-night stand who almost cost him everything.

Korine has her own demons. As a child, she witnessed her father’s murder, and she’s spent her life waiting for the killer’s return. She and Hatcher are both looking for closure, but the disturbing case that draws them together could be their last.

When the mutilated body of a corrupt Savannah judge surfaces, Hatcher and Korine find themselves on the trail of a vigilante who is showing no mercy. Not for the predators who’ve gone free. And not for anyone who gets in the way.

As the body count rises, and as Hatcher’s and Korine’s own pasts unfold, they must risk their lives tracking a killer they’ve come to understand all too well. After all, the ends justify the means.

Pretty Little Killers is the first book in Rita Herron’s The Keepers Series. This was my first time reading this author and I was thoroughly impressed. The book kept me on the edge of my seat. The suspense was chilling. Just when I thought I had it all figured out, I found out that I was wrong. I expected it to fit the mold of every other mystery suspense book that I have read but it didn’t.

Pretty Little Killers is about new FBI Agent Korine Davenport and FBI Special Agent Hatcher McGee. Hatcher and Korine had a tryst 6 months ago, which happened to be the same night Hatcher’s wife was being murdered. After hunting down the killer, Hatcher has spent the rest of his time inside a bottle. In his first case back, Hatcher ends up partnering with Korine. Needless to say, tensions are very high; especially considering that they still have feelings for each other. Korine also has the added baggage of having witnessed the murder of her father 25 years ago when she was 5-years-old.

At its core, Pretty Little Killers is about revenge. There is a serial killer who is killing people who basically didn’t get what they deserved. This person is seeking revenge for people who were wronged by the justice system. This is the type of book that makes you question the extent to which you would go to get justice for yourself or someone else. It’s about domestic violence, child abuse, and every other heinous crime that you could think of. There are also some rather gruesome deaths so be warned nothing is candy-coated. The brutality of it all intensifies once certain truths are revealed that shake one of the FBI agents to their core. I can’t go into more detail but I will say that I was beyond shocked. The author has set the bar rather high so I’m very interested to see what she does in the next book. I’m sure that it will be killer.