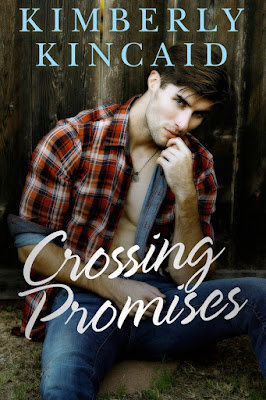 From USA Today bestselling author Kimberly Kincaid comes CROSSING PROMISES, the third standalone title in the Cross Creek series, releasing March 5th! A series filled with rugged, salt of the earth heroes who happen to be brothers, and strong family dynamics. Each standalone novel is filled with heart, humor, and heat. Order your copies of the Cross Creek series today!

For Owen Cross, the only thing that matters more than family is farming. As the oldest Cross brother, the land is his legacy, and he’ll do whatever it takes to make Cross Creek a success—including hiring local widow Cate McAllister to manage the bookkeeping tasks that are growing in his office like weeds. Cate’s as pragmatic as she is pretty, and she rattles his hard-fought composure at every turn.

Cate had known a lot of things about her husband before he died three years ago in a car accident, but how much debt he’d gotten them into wasn’t one of them. She needs her job at Cross Creek, even if her boss is both gruff and gorgeous. But Owen’s a family man, through and through, and the last thing Cate is interested in is anything—or anyone—with strings attached.

As Owen and Cate join forces to right the farm, they discover there’s more to the other than the surfaces shows, and that passion can be found in unexpected places. Can Cate heal from the loss of one family to gain the love of her life? Or will the past prove too much for the promise of the future?

Cate dragged a hand through her hair, her gaze moving over the boxes in disbelief. “Let me see if I’ve got this right. You don’t do any of your bookkeeping online. At all?”

“We do. Just not a lot of it,” he amended. The Cross men lived to work the land, not the ledgers. Sure, their current system was a little time consuming, but it wasn’t totally ineffective. Cross Creek had been running on it for decades. “We have software right here on the computer.” He paused to pull up the program they used for much of their bookkeeping before adding, “It’s just that none of us are great at using it.”

“So I see,” Cate said after a quick perusal over his shoulder.

Irritation splashed through Owen’s chest. “Our books aren’t that bad.”

The parting of her lips said she was primed and ready to take him to the mat on that count, and damn it, he really didn’t have time to argue with her. “Look, I know it’s going to take some work to get things running smoothly in here.”

“It’s going to take a lot more than that,” she murmured with a shake of her head, and just like that, Owen’s patience redlined.

“Can you do it, or should I find someone else?”

Once again, his words came out gruffer than planned. But before he could even think of cooking up an apology, Cate’s arms had snapped across the front of her sweater dress to form a don’t-mess-with-me knot that was far, far more of a turn-on than it had a right to be.

“That’s what you hired me for, isn’t it? To manage your books effectively?”

“Yes,” Owen answered carefully, still caught between the desire to be annoyed, the desire to apologize, and, well, just plain desire.

“Well, then. Since I have my work cut out for me with a chainsaw, I suppose I should get to it,” Cate said.

After a quick internal debate, Owen nodded. Brash or not, he needed her. More than he cared to admit. “Okay, then.”

She answered by way of pushing up her sleeves and sliding an elastic from her wrist to secure her hair in a knot at the crown of her head. Even with the more casual edge, the powder-blue dress still hugged her curves, her calves flexing and releasing as she moved from one stack of boxes to the next in her heels, and he cleared his throat.

“Just so you know, we’re pretty casual around here. You don’t have to look nice.”

Cate’s cheeks flushed a shade of pink that, while highly pretty, didn’t bode well for him in the mending-fences department. “Good to know,” she said, and holy hell, why did his mouth refuse to cooperate with his brain around this woman?

“Not that you don’t look, uh. Fine like that. All I meant was, you don’t have to get dressed up. Jeans are okay.”

She stared down at the toes of her shiny black shoes, but only for a split second before meeting his stare with her own. “Got it, Casanova. Is that all?”

For just a heartbeat, Owen was tempted to say no, to dig deep into his Neanderthal brain for the right words to tell her she actually looked fucking beautiful. To surrender to the hot demands coming from both his chest and his cock, and cross the room to impulsively kiss her sexy, sassy mouth.

But this was Cate McAllister. His buddy Brian’s widow. He shouldn’t think she was pretty. He shouldn’t wonder if the skin on her shoulders bore the same provocative dusting of freckles as the neck she’d just put on display. And he damn sure shouldn’t be turned on like floodlights at the fire in her eyes that he’d never quite seen before, but seemed to somehow fit her perfectly.

Kimberly Kincaid writes contemporary romance that splits the difference between sexy and sweet. When she’s not sitting cross-legged in an ancient desk chair known as “The Pleather Bomber”, she can be found practicing obscene amounts of yoga, whipping up anything from enchiladas to éclairs in her kitchen, or curled up with her nose in a book. Kimberly is a USA Today best-selling author and a 2015 RWA RITA® finalist who lives (and writes!) by the mantra that food is love. Kimberly resides in Virginia with her wildly patient husband and their three daughters.