4.5 Star Review ~ THE REASON IS YOU by Sharla Lovelace 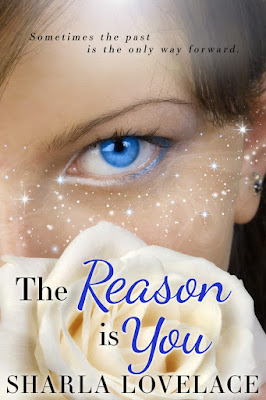 In the small Texas town where she grew up, Dani Shane learned early on that being different was all it took to raise eyebrows and stir up gossip, and even leaving town for two decades didn’t stop the talk. Now, Dani’s been forced to move back, and all she wants is to settle in quietly and put the past behind her. But the men in her life won’t make that easy.

First, there’s her old friend Alex, who’s mischievous, sexy, still hot enough to melt her shoes—and a ghost. He’s always been there for her, but also has a habit of popping up at the most inopportune times. And then there’s Jason, a flesh-and-blood man whose quiet strength and powerful body set Dani on fire.

As she struggles to build a new life in a town that won’t let her forget her old one, Dani’s determined to make sense of her love life, but first she’ll have to choose between a man who long ago touched her heart and a man she can actually touch . . .

The Reason Is You, is touching, emotional, romantic and a little intense. While you aren't going to need a box of tissue nearby while reading this story, you will need to have a few Kleenex around.

I won't say I was immediately drawn into the story but once it had my full attention, I was hooked. I fell in love with Alex "The Ghost" Stone immediately. His backstory is heartbreaking and will completely touch your heart. Dani Shane is so much more than she gives herself credit for. She met Alex for the first time, when she was sixteen-years-old. Dani was in desperate need of a friend and they have been best friends ever since. Now at the age of forty, she’s returned to her hometown and is now a single mother to a sixteen-year-old daughter named Riley. Riley and Dani definitely have their moments in this book, but the relationship is amazing.

The Reason Is You is a touching story about friendship, love, and learning that it's okay to be different. This is a story which will stay with you, long after you’ve read it. I'm not a person who usually reads a story more than once. But I will definitely be reading this story again.


Purchase The Reason is You from:
Amazon | Goodreads

The What Happens in Texas Series:

Sharla Lovelace is the bestselling, award-winning author of sexy small-town love stories. Being a Texas girl through and through, she’s proud to say she lives in Southeast Texas with her retired husband, a tricked-out golf cart, and two crazy dogs. Her books include the bestselling novel Don’t Let Go, the exciting Heart of the Storm series, and the fun and sexy new Charmed in Texas series.