Review ~ UNDONE BY YOU by Kate Meader 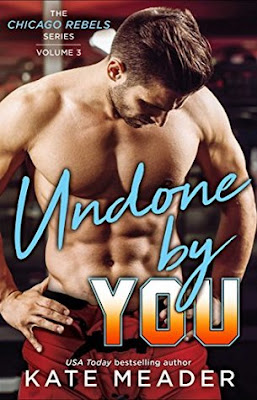 USA TODAY bestselling author Kate Meader brings her signature “steamy sex scenes, colorful characters, and riveting dialogue” (RT Book Reviews) to this novella in the Chicago Rebels series, following the general manager of the Rebels as he scores with one of his players off the ice.

Dante Moretti has just landed his dream job: GM of the Chicago Rebels. And screw the haters who think there should be an asterisk next to his name because he’s the first out managing executive in pro hockey. He’s earned the right to be here and nothing will topple him off that perch—especially not an incredibly inconvenient attraction to his star defenseman, Cade “Alamo” Burnett. Cade has always been careful to keep his own desires on the down low, but his hot Italian boss proves to be a temptation he can’t resist. Sure, they both have so much to lose, but no one will ever know...

As Dante and Cade’s taboo affair heats up off the ice and their relationship gets more and more intense, they’ll have to decide: is love worth risking their careers? Or is this romance destined to be forever benched?

Kate Meader has this incredible ability to write characters who burrow themselves into your heart. From the moment Cade Burnett and Dante Moretti appeared on the page, I knew they were special.

Dante is a former NHL defenseman known as The Beast. He’s also the first openly gay GM of a professional hockey team. He’s polished, refined, carries himself with confidence, and rocks a three-piece suite like no one else can. Cade “Alamo” Burnett seems to have it all. He’s funny, outgoing, and the life of the party. He’s an up and coming defenseman for the Chicago Rebels. He’s even rumored to be dating one of the owners of the team. But Cade isn’t living his life to the fullest. He’s gay and only his best friend Violet knows.

Dante and Cade each bring something different to their off limits office romance. They have this amazing chemistry and passion. While Dante is a bit older than Cade, he understands all of Cade’s struggles and truly wants what’s best for him. I loved watching Dante relax and lose control with Cade. While Cade likes to exude confidence, there’s still this vulnerable side to him that makes him even more endearing. These two are truly great for one another.

Undone by You is a standalone novella in the Chicago Rebels series. What really stands out for me about this series and this group of characters is that through everything, the players and owners truly have each other’s backs. They’re a family created by blood, trades, drafts, and choice.

Hooked On You releases May 7, 2018. It is currently available for pre-order.