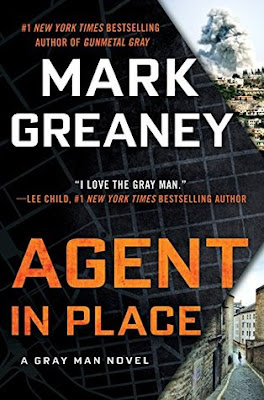 The Gray Man is back in another nonstop international thriller from the #1 New York Times bestselling co-author of Tom Clancy's Jack Ryan novels.

Fresh off his first mission back with the CIA, Court Gentry secures what seems like a cut-and-dried contract job: A group of expats in Paris hires him to kidnap the mistress of Syrian dictator Ahmed Azzam to get intel that could destabilize Azzam's regime.

Court delivers Bianca Medina to the rebels, but his job doesn't end there. She soon reveals that she has given birth to a son, the only heir to Azzam's rule--and a potent threat to the Syrian president's powerful wife.

Now, to get Bianca's cooperation, Court must bring her son out of Syria alive. With the clock ticking on Bianca's life, he goes off the grid in a free-fire zone in the Middle East--and winds up in the right place at the right time to take a shot at bringing one of the most brutal dictatorships on earth to a close…

Agent in Place is the next installment in the ever entertaining and intriguing story of Courtland “Court” Gentry who is better known in the world of espionage as The Gray Man. This time, Court is hired to kidnap a Spanish model who is the mistress of the Syrian president. However, this mission quickly turns into an attempt to assassinate the Syrian President as well as kidnap his illegitimate child. There is seriously a lot that goes on in this book. And, Agent in Place is a very long book. It has never taken me this long to finish any book. I am generally a very fast reader. The cast of characters is long and the action happens on multiple fronts.

I have only read one other book in this series but I am definitely a fan. The Gray Man’s reputation most definitely precedes him. He is resilient, fearless, and nothing short of amazing. As his mission becomes more difficult, he adapts. Somehow, he also manages to make being the boogie man fun. He never loses his cool and always gets the job done. Besides Court, Mark Greaney did a great job of developing several of the other secondary characters. Bianca Medina, the mistress/model had a lot of depth to her. Initially, I thought that she was shallow but she ended up being a strong woman who was just caught up in a bad situation. Then there were the Halabys, who were the reluctant leaders of the resistance who hired Court in the first place. They were doctors and didn’t have a clue as to what they were doing in this dangerous situation. All of these things played a role in showing us a different side of Court. He isn’t just a hired gun. He actually cares, and he makes it a point to make a difference if possible.

There isn’t anything negative that I can say about Agent in Place. It was everything that I expected. There was a lot of action, suspense, and political themes that kept the pace fast and furious. The Gray Man lives up to his hype like no one I have ever seen. It’s even more amazing that those who have heard of him, quake in their boots when they finally meet him face to face. If there is another book in this series, I’m going to have to read it.