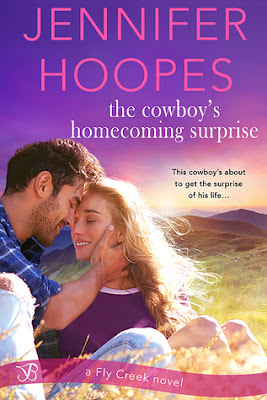 This cowboy’s about to get the surprise of his life...

Single mom Peyton Brooks’s first Friday night out—with adults—in forever isn’t exactly going the way she’d expected. She can line dance at the local dive bar with the best of ‘em, but she can’t shake the feeling she’s completely out of her depth. Then the first man she ever loved walks in the door, bringing chaos, especially since the handsome cowboy’s the father of her daughter. This definitely calls for whiskey…

Ryder Marks’s homecoming isn’t going how he’d planned. After years of working hard and finding success in Alaska, he’d thought returning to Fly Creek, Wyoming would feel different, more triumphant. Instead, he finds a daughter he knew nothing about, a father who still harbors anger and resentment toward him, and a former love he never forgot and who still warms his heart. Now he just has to convince Peyton he intends to stay and be the man she deserves, even if that means letting her go.

Peyton is a force of nature. Her drive and determination has served her well. Those traits helped her tremendously when her boyfriend unexpectedly up and left town and she found herself single and pregnant at nineteen. With the help of her grandmother and her ex’s parents, she worked, went to college, and took care of her daughter. For the first time in ten years she finds herself alone, as her daughter Melanie is spending the week at a stay away camp. With nothing better to do on a Friday night, Peyton and her best friend Emily plan a night out at the Wooden Nickel. The two are actually enjoying themselves until a quiet, seismic ripple descends over the crowd and Peyton’s idea of Lucifer walks in.

It’s been ten years since Ryder Marks has been back home to Fly Creek. A lot of things have remained the same, like his feelings and attraction to Peyton, and the animosity between him and his father. But some things have definitely changed, namely a new addition to the Marks family that he knew nothing about. After having a blow up with his father, nineteen-year-old Ryder left his girlfriend, his parents, and the only home he ever knew. In his mind, he wasn’t good enough. He set off for parts unknown, with the goal of returning only once he had proven himself. While he became a success well before returning, the years simply got away from him. With a new business acquisition, he feels now is the time to return. During his time away, he sent letters letting his mother know that he was okay, but never did he reveal where he was or what he was doing. Ryder is about to find out the homecoming he dreamed of was simply that, just a dream.

Usually, I tend to crush on heroes in books. But Ryder made it very hard to do so at times. My feelings for him ran hot and cold. Ryder is a complicated man with a huge chip on his shoulder. I would have definitely liked to have seen a flashback scene, letting me know what truly drove Ryder to sneak out of town in the middle of the night. I think that would have made me like him without question. But at the same time, I think there is something to be said for the way Jennifer had readers as well as the other characters put the puzzle pieces of Ryder together. While there was times I yelled at Ryder for what I viewed to be his pouty behavior, my heart also broke for him in regards to him finding out about his daughter and trying to navigate a relationship with her.

I loved Peyton in this story. Never once did she stand in the way of Ryder being a father. In fact, she welcomed it. Oh, there were definitely times where her protectiveness kicked in and arguments ensued, but I found that to be only natural. Where she could have came off bitter and bad mouth the man who didn’t stick around, she never did.

Peyton and Ryder are definitely two people deserving of a second chance and Jennifer did a really good job of giving it to them. You immediately see how much these two still care about each other, even though they haven’t seen or had any communication in ten years. You see that they regret the time apart. I loved that Jennifer didn’t make this an easy reunion. At times, things got messy, but that made the story real. I’m a sucker for the grand gesture in romances and this one was really sweet. But the ending of the story was worth all the ups and down my heart had to endure.

You can read an excerpt of The Cowboy’s Homecoming Surprise as well as enter the Fly Creek giveaway here.