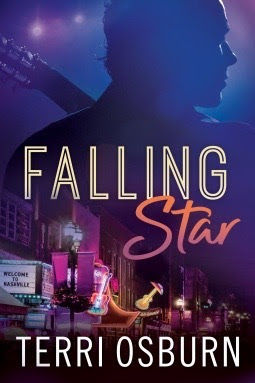 Naomi Mallard is a fixer by nature. And as PR manager for Nashville’s Shooting Stars record label, she’s facing her biggest fix: redeeming country music bad boy Chance Colburn. But in Naomi’s eyes, a police record and a stint in rehab are the least of Chance’s sins. He has spent his life running from demons and making tabloid headlines that have sent his career into a tailspin. Now he’s struggling to find his muse and maintain his newfound sobriety, all while counting on the woman he once betrayed to repair his tattered reputation.

Naomi is determined to keep their relationship strictly professional, but that’s not easy when an unexpected injury forces the former couple into disturbingly close proximity. Will mending their once-broken relationship be Naomi’s best save yet? Or will Chance’s past wreck any hope for a future together?

Before I get into Falling Star, I have to do a PSA. I’m not a fan of authors writing abuse into their stories. If an author or publisher chooses to include abuse in their stories, I think they owe it to the character, readers, and themselves to acknowledge that this is wrong and to mention ways for someone being abused to get help. In Falling Star, Naomi is abused by someone and she chooses not to report it. I can’t stress enough how this sends the wrong message. End of PSA.

I’m one of those fans who falls in love with one series of an author’s and then compares all their other stories and series to my favorite one. I loved Terri’s Anchor Island series. In my mind, no other books could be as good as those. I was wrong. Her Shooting Stars series is easily becoming a favorite as well.

Clay Benedict, founder and executive of Shooting Stars Records, has just signed the second artist to the label. Chance Colburn isn’t a newbie to Nashville or the record business. He’s a thirty-two-year-old recovering alcoholic and fallen star trying to make a comeback. Put in charge of making him look good to the world is Shooting Star’s PR manager Naomi Mallard. Naomi is extremely good at her job. However, her skills, patience, and heart are going to be put to the test when she has to work with Chance, the man who broke her heart seven years previously.

Chance is a man who knows what demons are and what they can do to your life. He’s been running from his demons pretty much his whole life. To a certain extent, he still hasn’t truly faced them. All of that is about to change. But before his demons can be slayed, Chance and Naomi are going to be pushed to their limits.

I have no words to express how much I loved Falling Star and the characters of Naomi and Chance. These two are truly good together and for each other. This is a second chance romance with characters who truly deserve a second chance. Their time apart allowed them to grow, mature, and truly become people who could offer someone forever.

I loved that Terri didn’t shy away from the struggles of being an alcoholic and what a person and family going through the disease goes through. I also loved that this was a story about reconnecting on an emotional and psychological level, with sex being a goal, but not happening until 75% into the book.

If you’re looking for a story about second chance love and characters you can easily fall in love with, then Falling Star is definitely a must read. While this is the second book in the Shooting Stars series, it is a standalone read.