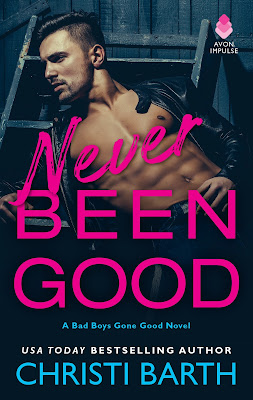 Flynn Maguire isn’t really a bad guy. Sure, he worked for the mob, but he ran a legitimate business—on paper anyway—and it paid enough to keep his brother out of the lifestyle. Until they turned on him. Now he’s stuck in Witness Protection, tending bar in Nowheresville Oregon… and pissed the life he knew is gone. The only bright spot? Fantasizing about his quiet, secretive, beautiful coworker.

Sierra Williams is a woman on the run. All she wants now is to settle into small town life… and ignore the brooding, sexy bartender who can’t seem to take his eyes off her. Flynn’s bad-boy vibe pushes all her buttons, but Sierra fell for the wrong man once already. She can’t afford to let her guard down again. Except Flynn’s tough exterior is slowly melting away to reveal the sweet man beneath and their attraction is too strong to resist.

Sierra and Flynn are falling fast, but they’re both keeping so many secrets. The truth could ruin everything… unless a girl who’s a little bad is perfect for a guy who’s never really been good.

“Bad boys aren’t always as bad as they seem on the outside. In fact, they can be pretty darned wonderful on the inside.”

Christi Barth should be on everyone's reading list. I don’t know how she manages to continue to write stories that immediately draw readers in, but she does.

Never Been Good finds Flynn Maguire aka Frank Mullaney still licking his wounds after being dragged halfway across the country as part of the WITSEC program. It’s been seven months since he and his brothers had to leave everything behind. Seven months of Flynn realizing that everything he believed to be true was a lie. Seven months of Flynn being miserable and angry. Seven months of realizing that he and his brothers lives have been turned upside down because of him. No, Flynn didn’t make the choice to turn on the Chicago mob and go on the run. His older brother Rafe did. But what else is new? It seems that since his parents died, his life hasn’t been his own. Other people have made decisions for him. There is however, this little bright spot in the too small town of Bandon, Oregon that he finds himself in and that is the waitress he works with at the Gorse.

Sierra Williams isn’t all she seems to be. After losing her parents at a young age, she grew up in various foster homes. Her hard work and perseverance was rewarded with a full scholarship to art school and grad school. However, she still had bills to pay. She ended up meeting and falling head over heels for a guy who only wanted to use her. Now, Sierra finds herself halfway across the country on the run from her ex, who is a thief and an attempted murderer, and possibly the police. Sierra loves being in Bandon, and is tired of keeping her distance from people. When an unforeseen accident forces her to spend time with Flynn, Sierra starts to think that maybe she can give her heart to someone else.

Never in my wildest dreams did I think Flynn would be such a nice, good, decent man. Yes, he worked for the mob, but only for the legal business. He never truly did anything illegal, well except for the night before he disappeared. All the times in the past seven months where he’s been “Mr. Grumpy” and a total jerk to everyone was just his way of dealing with what he viewed as ruining his brothers’ lives. He never felt he deserved their loyalty. “You use to be the heart. You were always the glue for us. You’re the one who makes us work. As brothers. You’re all we need.”

Once Flynn and Sierra started spending time together, they realized how much they have in common. They ground each other, not just physically, but emotionally. They’re fun together. Flynn has this need to protect Sierra and make her life better.

The mafia storyline continues to be played out in this book, but I do believe that Never Been Good can be a standalone read. You have the added storyline of Sierra’s past, which I can only assume will also come into play in the third and final book, Got it Bad. I’m looking forward to the conclusion of this series. Not because I want it to end. But because I really want to see how the Maguire men and the women who love them handle the reckoning of Chicago Mafia Crime Boss, Danny McGinty. I’m also looking forward to seeing how the secondary characters in the series step up. I have a feeling that all the friendships the Maguire brothers have formed will come into play with their future.

Bad for Her ~ Review