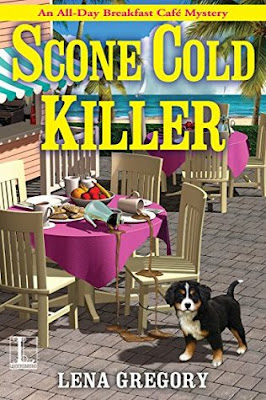 For Florida diner owner Gia Morelli, there’s no such thing as too much breakfast—unless it kills you . . .

When Gia Morelli’s marriage falls apart, she knows it’s time to get out of New York. Her husband was a scam artist who swindled half the millionaires in town, and she doesn’t want to be there when they decide to take revenge. On the spur of the moment, she follows her best friend to a small town in Central Florida, where she braves snakes, bears, and giant spiders to open a cheery little diner called the All-Day Breakfast Café. Owning a restaurant has been her lifelong dream, but it turns into a nightmare the morning she opens her dumpster and finds her ex-husband crammed inside. As the suspect du jour, Gia will have to scramble fast to prove her innocence before a killer orders another cup of murder . . .

I’ve been a fan of Lena Gregory since her first book came out in 2016. Her Bay Island Psychic Mystery series is one of my favorites. When I found out she had a new series, I have to admit I was skeptical. I tend to have a favorite series by an author and find that at times, the new series fall short of my expectations. In my opinion, Lena has proven that she isn’t a one series hit wonder. Scone Cold Killer has captured everything I love about Lena’s writing.

Gia Morelli was living a happy life. She loved her job working behind the counter at a New York deli. She knew her customers by name. They knew her. She also loved her husband Bradley and the life they built together. So what, if he worked long hours and he didn’t really discuss his job. When he was indicted for stealing millions from clients, she believed in him and stood by him. That is until tons of victims started coming forward and she found out about all of his extramarital affairs. Now that Bradley has been found guilty, their divorce is final, and Gia has been proven innocent in her former husband’s misdeeds, she’s ready to move on and start over.

With the encouragement of her best friend Savannah, Gia moves to Boggy Creek, Florida and opens her own restaurant, the All-Day Breakfast Cafe. Gia is all excited for her first day. Things get off to a shaky start when Gia doesn’t have a southern breakfast staple and her cook turns out to not really be much of a cook. This is all stuff Gia can overcome. Unfortunately, things get worse. Gia finds the dead body of Bradley in the dumpster behind the cafe and the police are looking at her. Good thing she has Savannah and Savannah's cousin Detective Hunter Quinn on her side.

Scone Cold Killer is a wonderful start to Lena’s All-Day Breakfast Cafe Mystery series. I loved the characters and the character building. I found myself enjoying the story rather than focusing on who the killer was. Lena is very good at misdirecting which is something I appreciate. I have to admit I was surprised by the killer, but my spidey senses did go off. I simply love Lena's mysteries and I’m looking forward to the next book in this series.

**I received a copy of this book from the author and voluntarily reviewed.**

You can read an excerpt of Scone Cold Killer here.