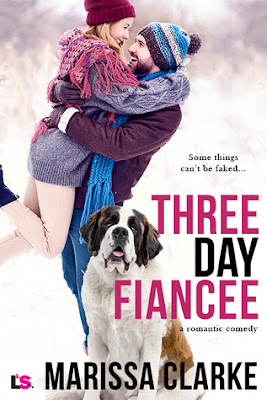 Some things can’t be faked...

Helicopter pilot Taylor Blankenship’s time schedule is maxed out. Between his job, his one-hundred and fifty pound slobbering mess of a dog, and his matchmaking grandmother, he has no time for anyone or anything-especially a woman. If only there were a way to get Grams to back down.

The job of New York City dog walker suits Caitlin Ramos perfectly while she preps for her CPA exam—steady, scheduled, and requiring very little human interaction; a huge seller since she’s still on the mend from a toxic relationship. Men suck. Especially her bossy hot client with the Saint Bernard that thinks it’s a lap dog. No way will she go for his plan to pretend they’re engaged to get his grandmother off his case. Down, boy.

Offered a bargain she can’t refuse, Caitlin finds herself playing the part of fiancée to Taylor. Fortunately, it’s only for three days. All she has to do is fake a relationship with Mr. Bossy Pants in front of his entire family, survive a fierce game of truth or dare with an unscrupulous pair of octogenarians, endure a one-on-one round of Twister with Taylor, and not lose her heart to a guy who turns out to be a lot more than she’d bargained for.

Dog Walker Caitlin Ramos’s morning is off to a horrible start. Her building doesn’t have hot water, the deli where she gets her morning coffee isn’t able to make coffee, and she gets rained on while walking to see her 7am client, Beauregard. But, in an “oh my” jaw dropping moment, her day picks up in a memorable meet/cute when she lays eyes on Beau’s owner for the first time.

Taylor Blankenship is at his wits end. His two-year-old Saint Bernard has decided to swallow a family heirloom and Taylor doesn’t have time to wait Beau out. Luckily he runs into his dog walker and is able to convince her to help him out.

In a comedy of errors, Caitlin and Taylor find themselves pretending to be engaged during his family’s fun filled weekend getaway. For these two, the line between make believe and reality gets blurred and hearts get put to the test.

Three Day Fiancée is the standalone second book in Marissa Clarke’s Animal Attraction series. The book and series are loosely related to Marissa’s Anderson Brothers series. From start to finish, I loved this book. I honestly thought the laughs would just be in the beginning of this meet/cute, but they actually continued throughout the book. Taylor is a to die for hero who’s funny, charming, and sweet. Caitlin is a likeable and relatable heroine. She wants to make up for her past mistakes and make something of her life. She doesn’t necessarily believe it or know it, but she’s braver and stronger than she gives herself credit for.

If you’re looking for a read that you can simply lose yourself in, that will have you laughing and sighing, Three Day Fiancée is definitely the book for you.