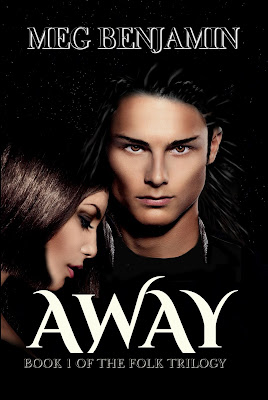 Grim Morrigan, Guardian of the Ward and part-time private detective, polices the Folk, the clans of fairies who live in the foothills outside Denver. But his main job is concealing their true nature from the mortals around them.

Enter mortal Annie Duran, who hires him to look for her brother Richard, missing and presumed dead for ten years. Annie has seen Richard in the parking lot of the nightclub where she works. Now she wants answers, and Grim’s supposed to find them.

The quest for Richard ensnares both Grim and Annie in a sinister conspiracy involving kidnapped women and outlaw magic. But they also discover their own overwhelming attraction to each other.

When Annie herself disappears, Grim’s need for answers becomes even more urgent. With the help of a dissolute prince and a motley crew of unlikely fairies, Grim confronts a rebellion among the Folk.

And it may take more than just magic and luck to save both Annie and Grim this time.

Hi Meg. Welcome to Read Your Writes Book Reviews. How are you?
I’m doing well! Thanks for having me here.

You’re more than welcome. What can you tell me about Away that isn’t part of the blurb already?
It’s book 1 of a new series called The Folk. The idea is that fairies look and act like us, but their society and culture are different from ours. Plus, of course, they have magical powers we don’t. Their society is right beneath the surface next to ours—hiding in plain sight, as it were.

What can readers expect from Away and The Folk series itself?
Thrills and chills, I hope! The Folk are facing a massive conspiracy to undermine their society, and the heroes of the Folk novels are trying to unmask the conspirators and stop them before they can do more damage. Plus, of course, my heroes and heroines have to find time for some romance in between the threats they’re trying to to fight off.

Grim sounds like a very intriguing man. What can you tell me about him?
Okay, first the name: the Grim is a kind of British goblin and Morrigan is the Celtic goddess of war, so Grim Morrigan starts with a pretty fierce heritage. He’s a half-mortal member of the Folk, which puts him at a disadvantage with some of the more traditionalist members of the group. But he has the ability to communicate with animals, which comes in handy when he has to deal with a Black Dog, and as the story goes on he learns to expand his powers with the help of Prince Bertie, another character who has a larger role to play as the series continues. Grim is a cynic and a pessimist who falls in love and finds his true calling. I’m sort of fond of him myself.

There’s something about Annie. I can’t put my finger on what it is. Tell me about her. What’s her backstory?
Annie’s been through a lot of personal tragedy in her young life—her brother Richard went for a hike in the mountains and disappeared when he was sixteen and she was twelve. After he was declared dead, her parents divorced and she moved with her mother to Nebraska. Her mother died of cancer just before Annie’s college graduation, and Annie decided to start a new life in Colorado. All very sad, but then Annie sees Richard in the parking lot of the club where she waits tables. A very much alive and well Richard who still looks very much like he did when he disappeared. Annie’s stunned, frightened, and then determined to find Richard and tell him just how much misery his disappearance called. Enter Grim Morrigan, a Guardian of the Ward who happens to have a Colorado private detective license. At first Annie and Grim figure Richard’s disappearance is the major mystery they have to deal with. But it turns out that Richard is a small part of a much larger conspiracy that has the two fighting for their lives.

I’ve heard of you as a contemporary romance author. I was surprised to discover that Away is actually your fourth paranormal romance. What do you love about writing paranormal romance?
I love the wide-open nature of paranormals. With contemporary romance, you have to keep fairly close to reality, although you can bend reality from time to time to produce happier outcomes for your characters than you might see in real life. But with paranormals, you can create your own reality. Which isn’t to say there are no rules—the world you create has to have a consistent internal logic or readers won’t be able to follow it. Still you get a lot of leeway in what you can say and do. And that can be a lot of fun to work with.

Outside of creating a unique paranormal world, what part of writing a paranormal romance is your favorite?
I really love the idea of unseen worlds, that the uncanny exists just around the corner. All of my paranormals are set in real places (San Antonio’s King William District for my Ramos Family books; Colorado for the Folk), and I had a lot of fun envisioning what form the supernatural would take in places I visit every day.

When you aren’t writing what will we find you doing?
Since I live near the foothills outside Denver, I spend a lot of time outdoors. The hubs and I go to farmers markets and hike in the summer and we go snowshoeing in the winter. Plus we visit lots of craft breweries, along with the occasional winery or two. It’s truly a magical place to live!

Meg, thank you for answering some questions for me.

A wall of darkness had appeared in the road, snuffing out the light. The illumination from their chemlights seemed to bounce back, unable to penetrate the gloom.

Behind her, Grim brought the car to a stop. “What is it?”

A sound seemed to grow in front of them, a roaring grumble, like a distant waterfall. A distant waterfall that was somehow getting louder. Annie bit her lip, piercing the dark with her suddenly puny flare.

Annie stared. The wall of darkness was moving, blanking out everything it touched. Annihilating the night around them.

The SUV door opened behind her.

“What about the light?”

“Screw the light! Get in the damn car.”

Bertie stepped in front of her, taking the flare from her hand. “Do what he says.” He moved into the middle of the road, extending his arms with a Cyalume in each hand.

Annie ducked into the car beside Grim, slamming the door behind her. The rumble seemed to be coming from the inky wall, like the sound of darkness advancing.

In front of them, Bertie extended his arms from his body in a V. The Cyalumes trembled. Grim opened the door again. “The flares don’t help. Get in, Bertie. Now.”

After another moment, Bertie opened the back door, bringing the lights with him. Their orange tinge glowed, ghostly inside the SUV.

“What is it?” Grim’s voice sounded tight.

“No idea. I’ve never seen anything like it before. What are you going to do?”

Grim pushed the SUV in gear. “Play chicken. With the armies of the night.”


Purchase Away from:
Amazon | Goodreads

Meg Benjamin is an award-winning author of contemporary romance. Her newest series, the Folk, is a paranormal trilogy set in Colorado. Meg’s Konigsburg series is set in the Texas Hill Country and her Salt Box and Brewing Love trilogies are set in the Colorado Rockies (both are

available from Entangled Publishing). Along with contemporary romance, Meg is also the author of the paranormal Ramos Family trilogy from Berkley InterMix. Meg’s books have won numerous awards, including an EPIC Award, a Romantic Times Reviewers’ Choice Award, the Holt Medallion from Virginia Romance Writers, the Beanpot Award from the New England Romance Writers, and the Award of Excellence from Colorado Romance Writers.

a Rafflecopter giveaway
Follow
Posted by Kim at 1:40 AM