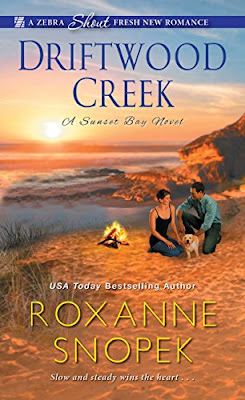 Nestled among the forests and coves that dot the Oregon coast, Sanctuary Ranch is a home for strays—both human and animal—and the starting off point for second chances . . .

After aging out of the California foster care system, Jamie Vaughn found her place in the world at Sanctuary Ranch in Sunset Bay. But other lost souls are not so lucky, so she’s made it her mission to rescue those that cross her path—like the injured pup she just found. The man he belongs to is obviously an unfit owner, so she’s just going to ignore the address on the dog’s tag. She has more important things on her mind, like roping her handsome coworker, Gideon, out of the friend zone and into helping her . . .

Head wrangler Gideon Low knows that Jamie’s bark is worse than her bite, despite her rough exterior. In fact, he’s determined to protect her from her too-tender heart, even if it means returning the not-so-homeless puppy—and putting some distance between them. But sooner or later, Gideon’s best intentions will turn on him. And he’ll learn that he’s not the only one with secrets—and that the love of your life can be right under your nose . . .

I’ve read several of Roxanne Snopek’s books and one thing I’ve learned is that she’s going to take readers on an emotional ride. Driftwood Creek proved to be emotional, as well as bring about unexpected emotions towards the characters.

Jamie Vaughn and Gideon Law have both managed to find their way to Sanctuary Ranch and are making the best of their new lives. Gideon is a man who surprised me. He looks like a cowboy. He acts like a cowboy. But until landing at the ranch, he wasn’t a cowboy. Gideon has secrets, and these secrets haunt him. He likes to make himself believe that he’s a monster and isn’t deserving of a second chance or forgiveness, but he is so much more than what he sees himself to be. Jamie is/was a challenge. I don’t think I’ve ever disliked a lead character so much. In fact, 90% of the time I found her to be extremely irritating. Jamie is consistently upset Gideon keeps trying to keep her in the friend zone. She doesn't respect boundaries. She doesn't like to give him space. Jamie is annoyingly pushy and insists on being a part of everything going on with Gideon. Just when I thought I was going to like her, Jamie would do something to get under my skin. I know the way she is and her personality stems from growing up in foster care and her need to help people. But man. This girl. Without question, Jamie does have a good heart and I do see it. She just really needs to find a balance.

The million dollar question is why did I continue to read this story when I obviously disliked the heroine so much….The answer is simple. I knew Roxanne was going to give me a story in the end that I would enjoy. Plus, my curiosity wouldn't allow me to stop reading. I'm definitely happy that I continued. Gideon and Jamie really had to fight hard to be a couple. A part of me likes that this wasn't easy for them. The secondary story of ranch neighbor Roman Byers added to the story, as did Gideon's background and his reason for being at Sanctuary Ranch in the first place.

Driftwood Creek is full of emotional ups and downs. Just when you think things are working out, Roxanne rips the rug out from underneath you. While I’m happy this series is continuing, I’m disappointed the next book isn’t about Sage and Huck. I know their story would be amazing. But the story of Abby and Jonathan definitely has me salivating, wondering what Abby’s story is.

Blackberry Cove, the third book in the series releases December 18, 2018