Review, Excerpt & Giveaway ~ ABOVE ALL by Rebecca Brooks 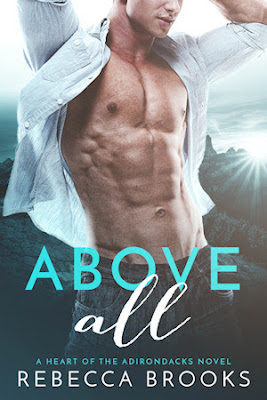 Reeling from a sudden breakup, Casey Webb leaves Brooklyn, drives north, and settles in a sleepy mountain town in upstate New York. She’s convinced she’s happy being alone—until she reads the acknowledgments in her ex-boyfriend’s hit debut novel, thanking his new girlfriend “above all."

Good thing Ben Mailer is in town. The hot, young Brooklyn-bound chef offers the perfect distraction. Soon the backwoods are heating up... But as their fling turns into more, the demands of Ben’s family and budding career make moving to her idyllic town impossible.

Now Casey must decide what she can’t live without—her life in the mountains, or the man she wants to be hers above all.

*Author's note: This is a re-release of Above All, published in 2014 by Ellora's Cave. Contains mountain men, baked goods, sex in a row boat, and a guaranteed HEA.*

Caution….Reading Above All will make you hungry.

I must admit I wasn’t expecting all the hotness. Ben and Casey can’t seem to get enough of each other. Since I’m admitting things...I have to say I didn’t read the blurb for the book. Going in, all I knew was that the hero was a chef and the hot times took place in the woods and in a rowboat. That was all I needed to know in order to want to read the story.

When things don’t work out with her boyfriend, Casey Webb empties her bank account, buys a used car, and travels from New York City north to the Adirondacks. There she finds a place to heal and reassess what she wants in life. She ends up in small town Bonnet, living and working at a campground. It’s been a year since she set out for parts unknown. If you were to ask her, she would say she was over her failed seven year relationship. But in truth, it’s still apart of her.

Ben Mailer and a couple of college friends arrive from various parts of the country to spend a weekend camping. Unbeknownst to Ben, walking into the office of the Paper Lake Campground introduces him to Casey and a future he never knew he wanted. But these two have obstacles in their way: 1) Casey is eight years older than Ben (her issue, not his) and 2) Ben lives and works in Brooklyn. These two are going to have to decide what they’re willing to do in order to live the lives they want and need to be happy.

Above All isn't told in first person, but rather in third person. The story is actually told from Casey's viewpoint, if that makes sense. I would have loved to have known what Ben was thinking throughout the story. Age was such a big deal to Casey, at times, her consistently bringing up their age difference really bothered me. For me, the story read more like women’s fiction, instead of contemporary romance. Rebecca did a good job of showing Casey come into her own and make peace with her life. She realized that, “Sometimes she was lonely and often she was alone. But she wasn’t unhappy. She had made peace with what her life had become.”

At last he turned to go. On his way out, he wished Casey a good night and then reached up to tap the back of the doorframe before swinging the door shut behind him.

She really, really wished he hadn’t.

Because lifting his arms to the doorframe made his jacket rise up enough to expose the top of his low-slung jeans. As well as the thin green line of his boxers hugging his hips underneath. It didn’t take X-ray vision to know that just above that patch of skin, hidden by his white undershirt and whatever else he had on under his black North Face fleece, were two long dimples carved into his lower back, matching the dimples on his face.

Officially the sexiest part of any man’s body, and the one thing Casey dreamed about on those rare nights when she did, in fact, allow herself to dream.

But this was not going to be one of those images she replayed in her mind’s eye. She was already berating herself for noticing. Not only had she turned to putty simply because he slid the hair out of his eyes as if he didn’t know the gesture would make every girl within a ten-mile radius want to extend her hand to his cheek. But she, Cassandra Webb, competent, capable, got dumped on her ass but still got back up again, thirty-four-year-old independent woman, had checked out his twenty-something-year-old butt.

She made herself swear she wouldn’t give him a second thought. She wasn’t interested. Period. She’d come to the woods to be alone and she fully planned to stay that way. She was going to read a little more until she was sufficiently distracted and then head back to her cabin, warm some cookies in the microwave, and go to sleep. Geller would take over registration in the morning and she would never see this group again.

Casey reached for her book, but she couldn’t stop her hand from hovering over the ledger. Before she knew what she was doing, she allowed herself a quick peek at the records and groaned.

Geller’s handwriting was unmistakable. They were staying for four days, three nights.

There was no way she wouldn’t find herself looking at those dimples again.


Purchase Above All from:
Amazon | Barnes & Noble | iBooks | Kobo | Goodreads

The A Heart of the Adirondacks Series: